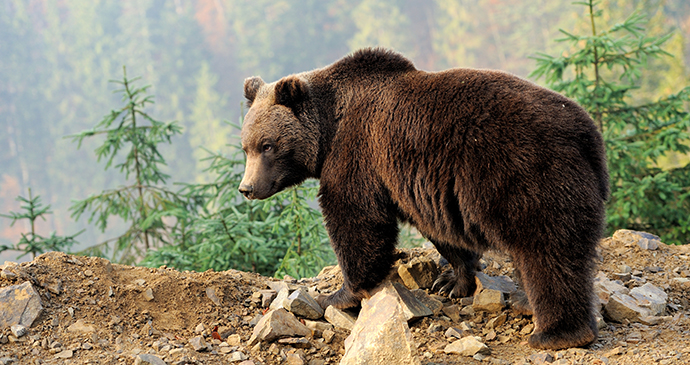 Once much more widely distributed, the grizzly has now retreated to the relatively few remaining wildernesses, but there is a fair chance of seeing one on the coastal Arctic tundra. Though closely related to the polar bear, it is a land-based animal. In colour, it is a mix of chocolate-brown, tan and sandy-buff. Unlike the polar bear, it is decidedly territorial, and aggressive in defence of its resident females.

As a tundra-dweller, the brown bear’s diet contains a high proportion of plant food, including berries and roots. But it will hunt whatever mammals present themselves, from caribou/reindeer to lemmings and voles. Although they have been known to kill a seal, they are more likely to scavenge the sea ice, taking advantage of the leftovers from a polar bear kill.

The Sami people of Siberia regard them as sacred, treating them as messengers from the gods, worthy of proper respect while still a welcome food source. Like its marine cousin, the grizzly is dangerous, as it is more inclined to attack than retreat.