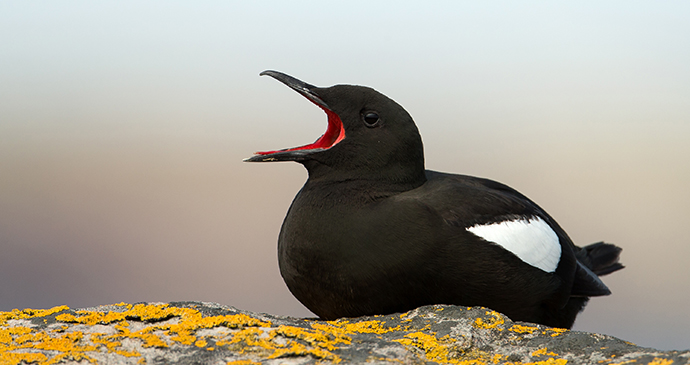 With its conspicuous white wing patches, the black guillemot is unmistakable © Giedriius, Shutterstock

Auks are black-and-white sea-going birds which come ashore only to breed on cliffs and cliffslopes. At their breeding places they congregate in noisy clusters, standing upright in penguin fashion. Hunting prey they use their wings to ‘fly’ underwater in hot pursuit of small fish and plankton. Their wings are short and paddle-like, and their flight in air – though they are somewhat reluctant to fly at all – is fast, furious and direct.

The most abundant of Arctic auks, the little auk has strongholds in Greenland – well over a million breeding pairs – and Svalbard – well over ten million breeding pairs – and has extended its range even to the northernmost part of Franz Josef Land. Little auks are highly gregarious birds, gathering at sea in great rafts inshore, taking off for mass aerobatics, almost darkening the sky, before coming ashore to their nests.

The Arctic is also home to huge colonies of guillemots, including common guillemot and Brünnich’s guillemot, and the less sociable black guillemot, which often hunts alone but may join with others to form line-abreast on the water and herd fish.