Circumpolar and restricted to the Arctic, these foxes are most abundant in the coastal regions, although they wander freely over the sea ice. They are often the only indigenous land mammal present in a region, for instance on Svalbard. They are small, much smaller than the red fox of lower latitudes, of which more than half is tail. The dog is heavier than the vixen.

The Arctic fox has a short, blunt head with small furry ears and thick insulating underfur, all in pursuit of effective heat retention; it may survive in temperatures as low as  70ºC. ‘Gloger’s Rule’ says that terrestrial vertebrates tend to be white if they live in the far north, an adaptation to living with snow, and the Arctic fox is a perfect example, along with the polar bear and the ptarmigan. But in summer they are dimorphic, appearing in two forms – greyish-brown or smoky-grey. The smoky form, known as the ‘blue’ fox, is less common in the Canadian Arctic, but represents about half the population in Greenland, Jan Mayen and Iceland. 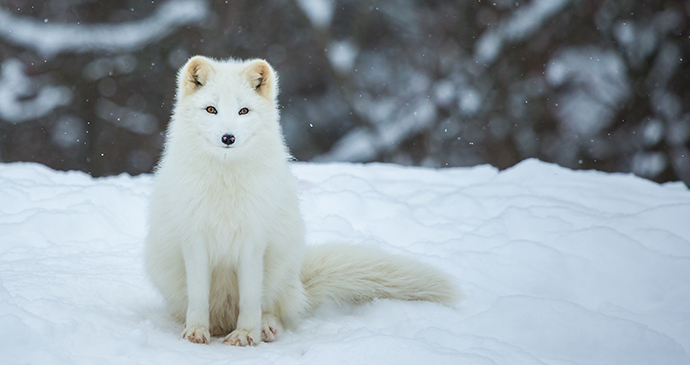 One of the prime reasons Arctic seabirds and waterfowl choose to nest on precipitous cliffs is because of the depredations of foxes © Glass and Nature, Shutterstock

Rather solitary creatures for much of the year, they nevertheless enjoy a strong pair bond, reuniting at the family den for the breeding season between February and May. The den will be in sandy soil or soft ground, perhaps burrowed into a creek or lake bank, the side of a pingo or a dune ridge. It will have a series of tunnel entrances, and is very often sited alongside a seabird colony, of little auks for example. The vixen may breed in her first year, but more normally in her third, dropping an average of seven pups, but as many as twenty. They are born in the underground den in the late spring after a 51–57 days gestation period. By mid-summer they will be weaned, at a time when the abundance or otherwise of food will have a major impact on success. At this time the dog fox will bring food to the den for the pups to learn to tear apart. They are cared for through the summer until they disperse to forage and fend for themselves. The foxes may not breed at all in a year when food is scarce.

Given fast ice or convenient ice floes to aid its travel the fox, which is perfectly capable of swimming short distances, may cover great areas in search of food. Whereas mainland populations prey mainly on rodents such as voles and lemmings, on the high Arctic islands much of the fox’s food comes from seabird colonies and tideline carrion. Coastal individuals are heavily dependent on fish, eggs, and young seabirds and the scavenging potential offered by polar bear leftovers. In fact they are opportunists, eating anything they can get hold of. Along the coast of east Greenland, foxes will establish themselves close to the cliffs where barnacle geese are nesting, in order to snatch the goslings as they leap off the nest ledges and while they are negotiating the scree boulders on their way to the grazing grounds of the tundra. In this activity they are greatly helped by the way the adult geese honk a distinctive call at the crucial moment of the jump.

Rising temperatures are encouraging northward expansion of the temperate red fox; Arctic foxes are in decline.