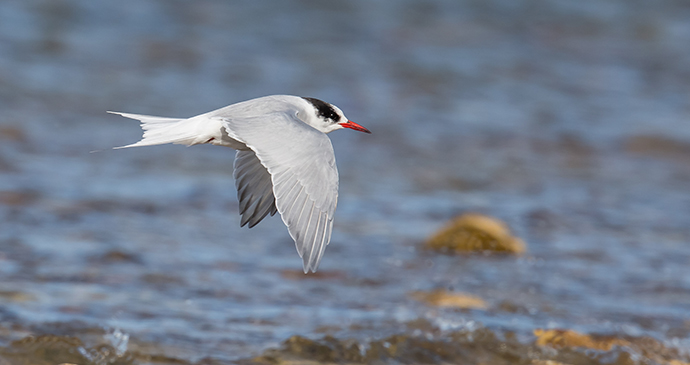 The Antarctic tern closely resembles the Arctic tern, but the breeding adult is naturally in summer plumage, with a black cap and tail streamers © Andrew M Allport, Shutterstock

There are over forty species of tern, from the Arctic to the Antarctic. Most are birds of the coast, some are oceanic. They are smaller, more graceful and more streamlined than the gulls which they superficially resemble, but they have narrower, more pointed wings and slender, sharp-pointed bills. Many have deeply forked tails, earning them the sailor’s name of sea-swallow. They are short in the legs with small webbed feet; buoyant on the sea yet rarely in it, for they swim poorly. They often enjoy a rest on a piece of driftwood or raft of seaweed.

Terns tend to have white bodies with grey backs and wings, very often a black cap and sometimes a jaunty crest. Their bills and feet range in colour from black to blood-red or yellow. Exceptionally aerial, they roost at night but are in the air for most of the day, outside the breeding season. They can live for long periods on the wing. They fly with steady purposeful wingbeats, never soaring, tending to look down, their beaks pointing to the water. In searching for fish they may hover, then plunge head first for small fish at the surface – splash, snatch and up again.

Typically, terns nest in close-packed colonies, some very populous indeed. The stimulus and noise of company leads them to synchronise their egg-laying, with resulting advantages in terms of safety – the safety of numbers which confuses predators like rats, skuas and gulls. Even so, there is high mortality, which accounts for the average clutch of three or four eggs.

The nest is often little more than a shallow depression, a hollow on a sandy or shingle beach, usually on an island. The chicks are fed on whole small fish, such as sand-eels, which may be longer than the chick itself, so that while the head end is being digested the tail hangs out for all to see. Breeding success relies on the supply of suitable fish. The chicks are heavily dependent on their parents until long after they have fledged, but if they are lucky they may live to the ripe old age of 30.