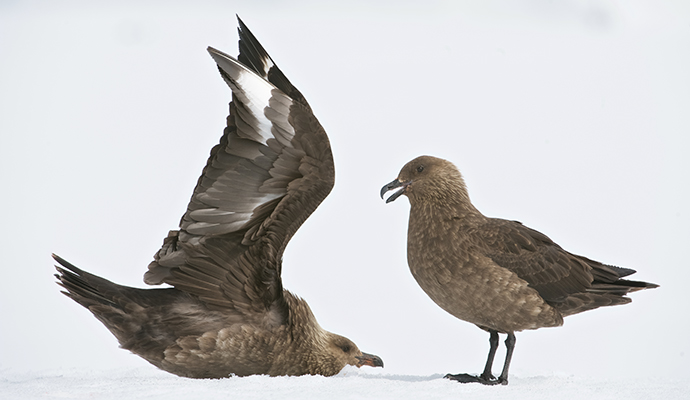 Brown skuas are large and powerful, with a heavy body and a fierce manner © Enrique Aguirre, Shutterstock

The name ‘skua’ comes from the Old Norse skufr or skúgvur and is presumably an onomatapoeic rendering of their chase-calls in flight. Skuas look superficially like immature gulls, but they are heavier, more robust and menacing in mien, as befits birds of prey. They have conspicuous white patches at the base of the primaries. Theirs is a piratical nature and they have hawk-like beaks to serve it. Half a dozen species in two genera breed in the high latitudes of both hemispheres. Much learned discussion revolves around the question of how many species are present in the deep south, since distinct populations exist on various island groups. In Antarctica, the main contenders are the south polar skua and the brown skua, the southern version of the great skua. While they are generally accepted as distinct species it is often not in the least easy to separate them in the field, when their distribution overlaps, as in the peninsula, and where they occasionally hybridise as Catharacta maccormicki x lonnbergi.