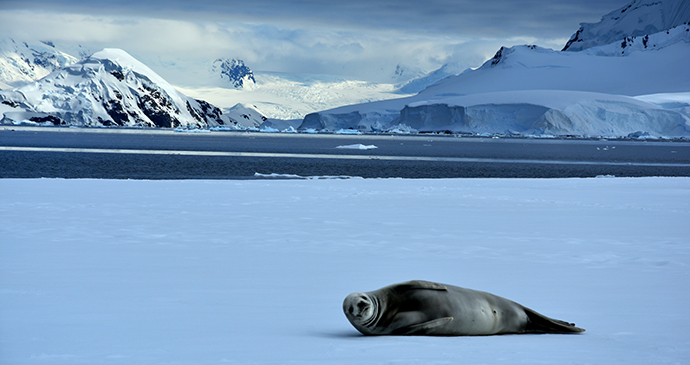 The crabeater seal is the most abundant seal in the world © K Ireland, Shutterstock

There are two main divisions – Superfamilies – in the Pinnipeds. First the Otariidae which includes fur seals, sea lions and walruses. In the Antarctic, the only representative of these ‘eared’ seals is the fur seal Arctocephalus gazella. They have pointed snouts, a very thick underfur and hind flippers which can be turned forwards and used to great effect in almost galloping over land.

The other major grouping is of the Phocidae, the ‘true’ seals which have no protruding external ear, cannot run or raise themselves on fore flippers, cannot swivel their hind flippers and must clumsily haul or hump themselves on land in caterpillar fashion. Seals are well adapted to aquatic life in polar regions, cushioned and insulated from the cold air as effectively as from cold water with either a thick coat of blubber or a dense pelage. 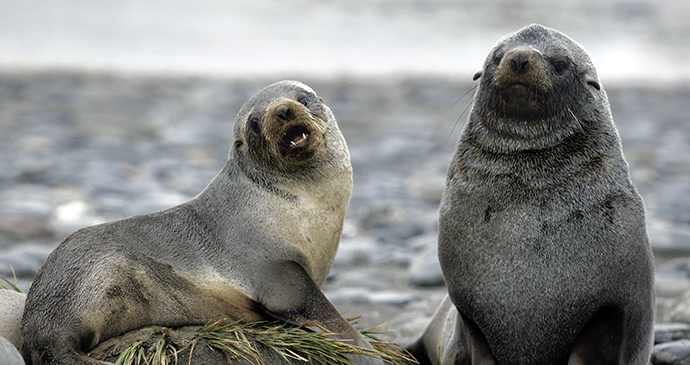 They have torpedo-shaped bodies superbly designed for fast underwater travel. Their nostrils may be closed and sealed by muscular contraction as they enter the water. They exhale before diving to reduce the amount of air in their lungs and derive the necessary oxygen from their well-supplied blood systems. Their heart-rate slows, their metabolism is reduced. On surfacing it is several minutes before their heart-beat returns to its surface rate.

Seals must come ashore to breed, but some species are as comfortably able to pup on the fast-ice as on the sub-Antarctic or continental beaches. Males and pregnant females gather annually at the breeding place, where copulation takes place soon after the pups are born. Implantation is delayed for three months so that, although the gestation period is nine months, the annual cycle is maintained.

The four truly Antarctic species are the leopard, the crabeater, the Weddell and the Ross seal. The Antarctic fur seal and the southern elephant seal, or sea elephant, the largest of all the seals, are abundant elsewhere in the sub-Antarctic islands and southern South America, but are at the southern end of their range in the Antarctic Peninsula.