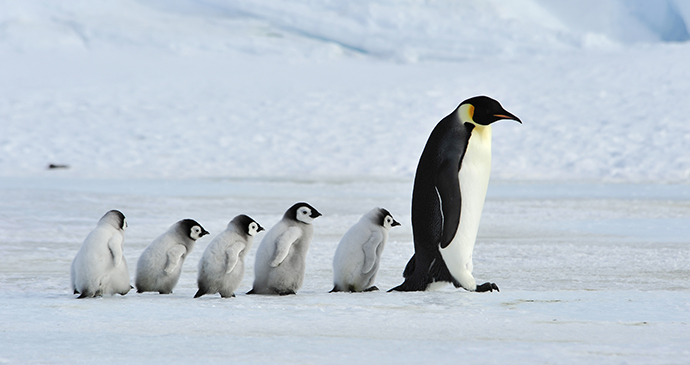 Emperor penguins are one of the hardiest species found in the Southern Hemisphere © vladsilver, Shutterstock

Penguins have a long history. Millions of years ago, in the Tertiary period, there were at least 25 species in 18 genera. In the Miocene there was a species 1.5m (5ft) tall, weighing well over 90kg (200lb). Today we have 17, some would say 18, species. Contrary to general opinion, few of them live in the Antarctic though they are widespread and virtually confined to the Southern Hemisphere (the exception being the equatorial Galápagos penguin).

Early explorers thought penguins were fish and classified them accordingly. In fact, as birds, they are superbly designed for their job, flying underwater with great skill. Their compact, streamlined bodies have a deep keel for a breastbone and massive paddle muscles. Their feathers are reduced in size and stiffened, with a fluffy aftershaft at the base. This down creates an insulating layer of air over a thick layer of blubber and skin. Their heads retract to create a perfect hydrodynamic shape. Effectively their bodies are packed in blubber, with a string vest and a windproof outer parka. Their wings are reduced to paddles, and the bones flattened, with the wrist and elbow joints fused, so that although the wing can’t be folded, it acts as a powerful propulsion unit. The legs are set well back on the body so that the feet act as control surfaces in the water. Some walk, some progress by jumps, some by tobogganing over ice and snow. Some can climb steep cliff faces, some leap like salmon in order to land on ice floes. On land they walk upright with a seaman’s rolling gait. In the water they travel fast by ‘porpoising’ at the surface or diving in pursuit of squids, shrimps or fish. 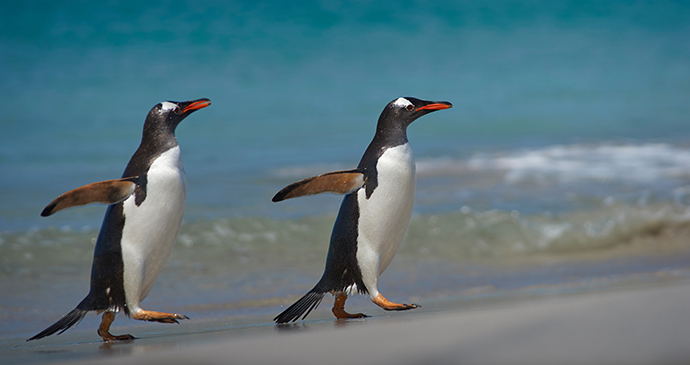 Gentoo penguins are distinguished by the neat white bonnets above their eyes © JeremeyRichards, Shutterstock

They are highly sociable birds, both at sea and ashore, breeding in colonies which can involve hundreds of thousands of pairs. Those few which breed in tropical or temperate habitats do so underground to avoid the sun. The invisible barrier of warm tropical water denies them access north of the equator. (It is true that the Galápagos penguin breeds just a few miles into the Northern Hemisphere, but only because the Humboldt current swings around the islands bringing cold water from the Antarctic, forcing the equatorial warm water northwards at that point. Only nit-pickers will deny that the Galápagos penguin is biologically southern.) While king penguins are enjoying a healthy population, most Antarctic and sub-Antarctic species have been decreasing in recent years.