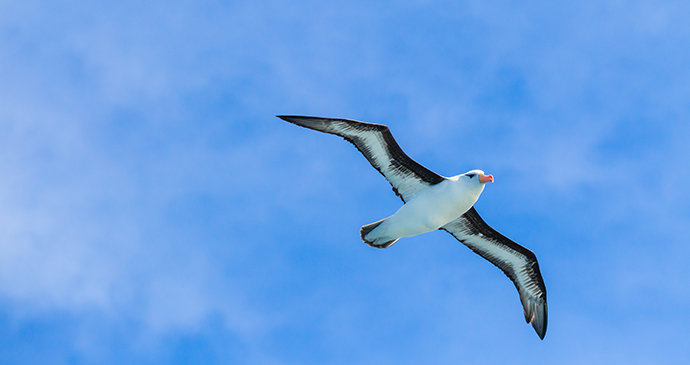 The black-browed albatross is an enthusiastic ship follower in the Antarctic © jo Crabbin, Shutterstock

The name is an English sailors’ corruption of the Portuguese alcatraz for a pelican, a bird which early explorers would have known from the Mediterranean. Albatrosses are divided into two genera, Diomedea and Phoebetria, but in common language the 14 species are crudely divided into the ‘great albatrosses’, the wandering and royal; and the ‘small albatrosses’, collectively better known to seafarers as mollymawks, from the Dutch mal, foolish, and mok, gull. Another term for them is ‘gooney’, from the English dialect word for simpleton. These pejorative and richly undeserved epithets were the result partly of seeing albatrosses ashore, out of theirelement, appearing clumsy, and partly because of their endearing but ill-advised innocence in standing quietly while being bludgeoned by a club and pickedup for the pot.

In the late 18th and 19th centuries albatrosses were much persecuted both for their meat and their plumage, and were also taken in significant numberson hook and line by sailors who made pouches out of their webbed feet, feather rugs from their skins and pipe stems from their bones. Albatrosses have stout bodies with large heads on long necks, mostly short tails and strikingly long and narrow wings (over 3.6m (12ft) in the wanderer). They have short legs, placed well back, but the most eye-catching feature is the massive hooked bill, covered with a number of horny plates. Adult great albatrosses are mainly white, while the twelve smaller species (mollymawks) have variable quantities of black on the back as well as on the wings. Most are inhabitants of the southern oceans, mainly between 30° and 60°S, but one is based on the equatorial Galápagos Islands, ranging the Humboldt current area. Three are confined to the North Pacific, effectively isolated from their southern cousins by the windless region of the doldrums. None breed on the Antarctic continent.

Albatrosses spend most of their lives in flight, gliding the waves and circling the major wind systems. They are highly accomplished dynamic soarers, seemingly motionless yet totally in control, but they rely on a constant supply of wind and are highly inefficient in flapping flight. In the occasional calm they are forced to sit it out on the surface and wait.

Their food is mainly squid, taken by surface-seizing when they settle on the water, floating high with plenty of freeboard, wings often raised to keep them dry. They will also examine floating weed in the hope of finding fish eggs and they will follow ships for galley waste. They are slow to mature, mollymawks breeding in their sixth or seventh year, great albatrosses in their ninth. Giving evidence of their southern origins, even the North Pacific species breed at the time of the southern summer, October to April. They all breed colonially, on remote oceanic islands. Mating for life, they court with dances which may seem somewhat ungainly to us, bowing and scraping, bill rubbing and wing stretching. The nest is a scrape on the ground or a mud mound lined with a few feathers or grasses. The single chick is fed by regurgitation of stomach oil. The process is long drawn out: from egg-laying to fledging takes a year in the case of the great albatrosses, and as a consequence they breed only in alternate years. Mortality is very high in the first year, but those which survive enjoy long lives, many reaching ages well over 50.