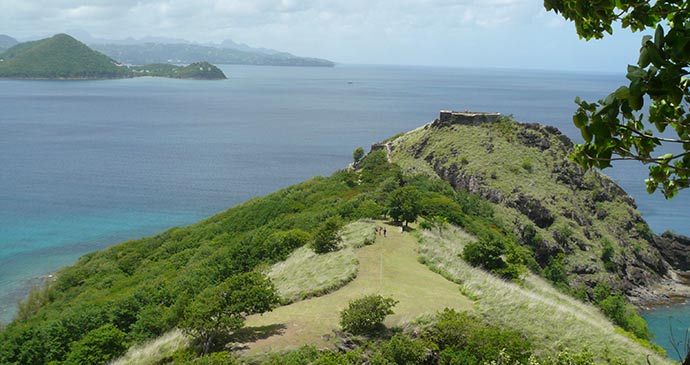 Once used as a lookout point and military base when the British and the French fought over Saint Lucia, remnants of the military fort and bunkers used during that time can still be seen.

A key landmark in Saint Lucia, the silhouette of the Pigeon Island’s twin hills can be seen from many of the beaches from Castries to Rodney Bay . Once used as a lookout point and military base when the British and the French fought over Saint Lucia during the 17th, 18th and 19th centuries, remnants of the military fort and bunkers used during that time can still be seen. Visitors can climb the lookout points at the top of the island for fantastic views over much of the volcanic interior of Saint Lucia, and across the Saint Lucia Channel to Martinique. Until 1972, when a causeway was constructed, Pigeon Island was an actual island, but these days it is actually connected to the mainland so you can get here by car, or for something different, take a water taxi. The island is a popular venue for picnics and weddings due to its stunning views of the Caribbean Sea and Atlantic Oceanand is also home to the main stage performances of the annual Saint Lucia Jazz & Arts Festival held in May. There are two tranquil strips of sand on the protected, southern side of Pigeon Island where you can rent sunloungers and grab a bite to eat at the waterfront café. There are also watersports on offer near the café.