With galleries descending 4km below the surface, Grotte Marie Jeanne is the largest cave system in the country.

The Marie Jeanne Cave (Grotte Marie Jeanne) is the largest cave system in Haiti, and one of the largest in the entire Caribbean. Located on a hill 20 minutes’ walk above Port-à-Piment, its galleries extend 4km below the surface.

The cave entrance is kept locked. To arrange a visit, call local guide Jean-Baptiste Eliovil (tel: 3638 2292/3782 3275), who helped map the cave with a speleological survey team from West Kentucky University. He can provide hard hats, but bring your own torches. 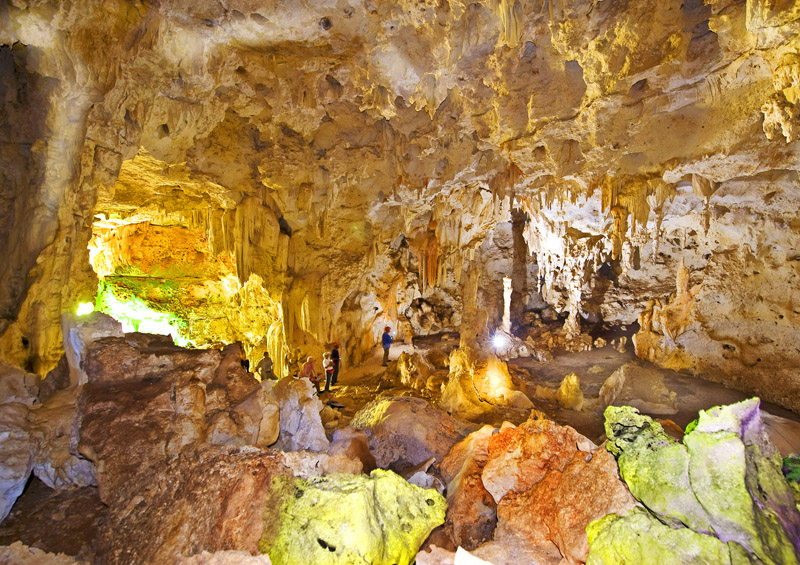 One of the largest cave systems in the Caribbean, the Marie Jeanne caves, which include three main galleries, can be explored leisurely © Jacqualine Labrom, Voyages Lumière Haiti

At the gate, there’s an impressive information board with a map and caving safety information in multiple languages. Metal steps lead down into the cave. The entrance was revealed by the collapse of the ceiling of a central gallery, now long overgrown with trees. Three cave galleries lead off this bowl. The first you’re taken to is the most open of the three. The floor is covered in bat guano, while roots extend into the mouth – all rich environments for cave fauna. Most notable are the impressively large Amblypigids (whip spiders, or whip scorpions), with wiry legs that extend up to 40cm from their bodies. Their mandibles look scary, but arachnophobes should take heart that they are in fact quite harmless.

The most impressive of the three galleries is full of beautiful formations, each with its own name. The pachyderm-like ‘Elephant’ has a beautiful quartz glint, while the twin stalagmites of the ‘Two Candles’ tower over you at 3m high. Near the top of the gallery is a narrow chamber with overhead ‘cathedral bells’, and the ‘robes of Marie-Jeanne’ hanging down in smooth stony folds.

The final gallery is the deepest and has its own metal staircase descending into the mouth. Near the entrance there’s a small reflecting pool contained by a travertine dam. Casual visitors will probably be happy with this, but for avid spelunkers there’s the potential to explore much further – the passages from here lead deep into the hill.