Set amid incredible scenery, this mountain fortress is a testament to the struggle for Haitian independence.

Even before you reach it, the statistics about the Citadelle Henry demand that you be impressed: on top of a mountain 900m above sea level, 14 years to build with the labour of 20,000 people, and with walls 4m thick and 40m high. By some way the biggest fort in the Caribbean, it could hold a garrison of 5,000 people for a year, and yet it never saw its guns fired in conflict.

Visitors get their first glimpse of the Citadelle soon after leaving the village of Choiseul. The landscape suddenly opens up and there it sits above you, its massive scale designed to humble anyone approaching. The sharp wedge of its forward bastion sits high out of the vegetation, ‘the prow of a ship breasting a green wave’, in the words of one observer, but cleverly shaped to shield the bulk of the fort from prevailing storms coming from the coast. 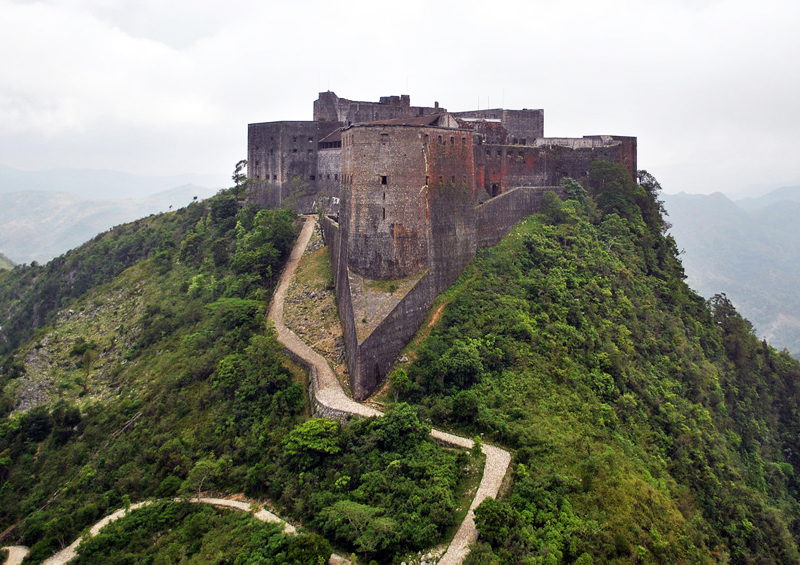 The immense Citadelle near Cap-Haïtien is a rare match for its ‘eighth wonder of the world’ hype © SPC Gibran Torres, Wikipedia

Construction began in 1804, when Dessalines ordered the fortification of Haiti against future invasion. Larger than anything previously constructed, it was to be a final redoubt and seat of power in the north. Its radical design mixes up elements of the most cutting-edge military architecture of the time, though the names of its architects have been lost. The surrounding slopes were cultivated with food crops, protected under the cover of the Citadelle’s cannons, while the roofs were designed to capture water to feed the huge cisterns. Anyone attempting to lay siege here would surely have their work cut out.

On the north side of the courtyard is the Governor’s Palace, which is sometimes opened for exhibitions. A more permanent museum is to the right of the palace, below the Royal Battery. It has a small display of period artefacts, and showroom for an excellent 20-minute documentary (in English and French) about Henry Christophe.

From here climb up to the southeast-facing Princess’s Battery, for the most spectacular views the Citadelle can offer. From here you can see as far as Cap-Haïtien, and Christophe could look out with his spyglass to observe what ships were arriving in port. The whole of the Plaine du Nord is laid out before you, with the ranks of the Massif du Nord queuing up behind. When the clouds close in as they quickly can, you can feel isolated from the whole world. On every side there are some frighteningly sheer drops. It’s at this point that guides often tell the story of Christophe demonstrating the fanatical loyalty of his soldiers by ordering an entire company to march off the walls. It’s apocryphal, but you can well imagine the messy end – be thankful for the recently installed safety rails.