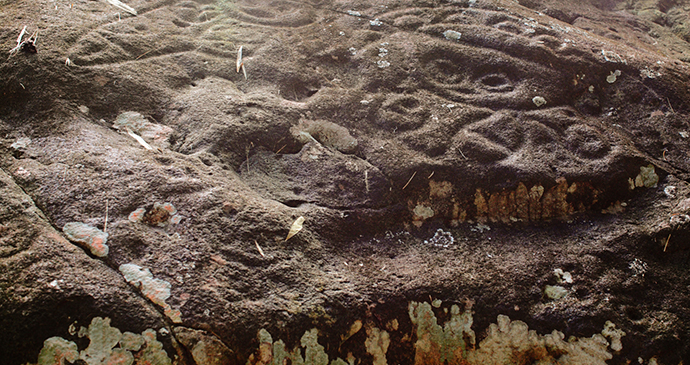 Petroglyphs are images that have been etched into rock and are found all around the world, created by many different people from a range of historical eras. Grenada’s petroglyphs are believed to have been carved by the island’s earliest Amerindian peoples and are found at several sites in the north. The best known are those at Duquesne and Mt Rich. Mt Rich is on the road between Sauteurs and Hermitage.

The elaborate carvings appear to depict figures, faces, and even monkeys, which appear in ancient myths.

Though we can only speculate on their meaning, most scholars believe the images relate to gods or mythical figures, and some speculate that, as many are discovered near water, they may perhaps have some symbolic meaning – perhaps during periods of drought.The elaborate carvings appear to depict figures, faces, and even monkeys, which appear in ancient myths.

The Mt Rich petroglyphs are carved on a large boulder now upturned at the bottom of a steep but narrow valley where the St Patrick River flows. There is no sign and it is hard to believe that such an important piece of Grenada’s heritage appears to have been abandoned in this way. At a large road junction a little to the north of Mt Rich look for a peach-coloured bus shelter and a green-painted house. The only way down to the river is via the private garden so please give the owners a shout and ask for permission. Some rough steps run down the side of the house and through the garden. They are quite steep but it isn’t far. When you reach the river, head to your right (you will probably have to wade a bit) for about 5 minutes until you come to the boulder. The river is shallow, but you may have to negotiate fallen branches and other debris. You can’t miss the boulder. The carvings are very impressive and it is awesome to witness something that was created such a long time ago, for reasons we do not understand, by the indigenous people who came to live here from the South American continent.

At the southern end of Duquesne Bay are more accessible examples of Grenada’s Amerindian petroglyphs, though they are in poor condition, unfortunately. Duquesne Bay is located on the west coast road to the north of Victoria, at the point where the road turns inland towards Sauteurs. When you get down to the beach (you can park by the fishing boats and concrete buildings), simply head left all the way along the sand to the rock face at the far end. On my most recent visit I met a very nice fisherman who proudly declared that it was his job to care for the petroglyphs. Though by no means an expert on the subject, I do feel that scrubbing them with detergent and sea water on a daily basis may not be the best method of preservation. The carvings are far less visible than on my previous visits and the site is clearly in a state of decline.