A combination of two waterfalls named the ‘mother’ and ‘father’, they have deep pools, a small hot water springs, and an easy viewing platform for visitors. 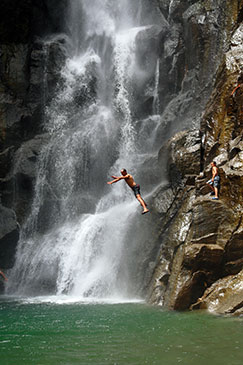 The Father Falls, with a drop of around 85m, and the Mother Falls, with a drop of around 40m, make up the Trafalgar Falls. As you face them, the Father Falls are on the left-hand side and the Mother Falls on the right. The Father Falls used to cascade down a tall face of smooth rocks alongside a natural hot spring, but in 1996 there was a huge landslide and this unusual hot and cold water cascade was lost. Tropical Storm Erika in August 2015 moved many of the landslide boulders away and so the Father Falls now partially resembles its former state. The waterfall is still quite lovely, however. It has a deep pool and there are warm water pools and springs nearby. The source for the Father Falls is a river that runs from the Freshwater Lake via Ti Tou Gorge in the Morne Trois Pitons National Park.

The Mother Falls are the more accessible of the two waterfalls, though it can still be a very tricky scramble over large and often slippery boulders. Taking its source from the Morne Trois Pitons River (better known locally as the Breakfast River), which is crossed by hikers on the Boiling Lake Trail from Ti Tou Gorge, this thundering waterfall also has a great pool.

The Trafalgar Falls visitor centre has a large car park with souvenir stalls, toilet and changing facilities, snack bar and a display room with examples of flowers and birds that may be seen in the area. It is also the entrance to the waterfall trail and where a forestry officer will ask for site passes. The Trafalgar Falls has a wooden viewing platform just ten minutes or so along an easy trail where you can get photographs of both falls. Th is area is a rainforest habitat and it is possible to see several species of fern, epiphyte and bromeliad. Look out for large land crabs scrambling for cover as you pass. Certified guides can be hired at the visitor centre to escort you either along the trail to the viewing platform or all the way to the foot of the falls.