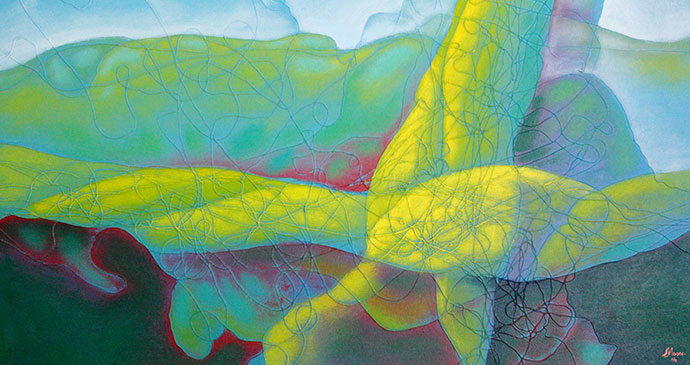 Whilst in Roseau, take some time to view the Art Galleries exhibting Domincan Artists’ work, for example this piece by Ellingworth Moses © Paul Crask

Look up at the jalousie windows, the ornate fretwork verandas and the mountainous backdrop for a picturesque view of Roseau.

Roseau is Dominica’s capital and also its major seaport. It is located on the southwest coast of the island at the foot of a broad river valley. The central shopping, administrative and business district of Roseau is to the south of the river, and the residential neighbourhoods of Pottersville, Goodwill and St Aroment are situated to the north. At the southern edge of the central district is the old French Quarter, where the original European settlement was built (the Kalinago were already here). To its south is the coastal road and the neighbourhoods of Newtown, Citronniere and Castle Comfort.

First impressions of Roseau are generally mixed. For a capital, the town is very small, rather cluttered and often busy; habitually jammed with cars, people and buses. It can be noisy, sometimes rather smelly (open gutters and a propensity for some to urinate anywhere), and it is always very hot and sticky. A lack of proper footpaths and all those open gutters frequently force pedestrians out into the road amongst the traffic. This can make both driving and walking around town quite a precarious and frustrating business. The buildings of Roseau are a seemingly unplanned jumble of the old, the new and the downright ramshackle. Walk with your head down, dodging vehicles, trying not to fall down through holes in the pavement, dodging an increasing number of beggars, and getting steamy under the collar, and the town can feel ugly and oppressive. Take your time, walk slowly, look up at the jalousie windows, the ornate fretwork verandas and the mountainous backdrop, and it can be a different town altogether. But whatever you make of it, Roseau is really not a place for the traveller to dwell; for the beauty, intrigue and natural attractions of this wonderful Caribbean island lie beyond its diminutive and claustrophobic capital.

Ambitious plans to beautify Roseau and make it more visitor friendly have been talked about for many years and were on the cusp of being implemented before the financial setback of Tropical Storm Erika. The enhancement plans included boardwalks along the Bay Front, river paths, water taxis, pedestrian zones and more green spaces. A main bus terminus has also been suggested, which would help to alleviate traffic in the town as well as simplify things for those who don’t have several years available to spend trying to figure out where on earth to catch a bus.

Whether you love it or hate it, Roseau is inescapably the administrative engine room of the island, the hub and the hubbub, where government, financial institutions, communications and transport services find their nucleus, where merchants trade and where farmers turn up from the countryside to sell their produce. It is also where the majority of visiting cruise ships put in.

The best and most practical way to get around Roseau is on foot, but even that can be a challenge. The town is small and nowhere is very far but a lack of proper footpaths, holes, extended porticoes and open gutters make walking quite troublesome, and it is important to keep a sharp lookout for traffic when you are inevitably forced on to the roads. Finding your way round the central area is fairly straightforward, as the layout is a grid system with all roads running in a straight line north to south or east to west. In the old French Quarter, the road layout is a little more interesting. Look out for small street signs on corners to help you find your way round.