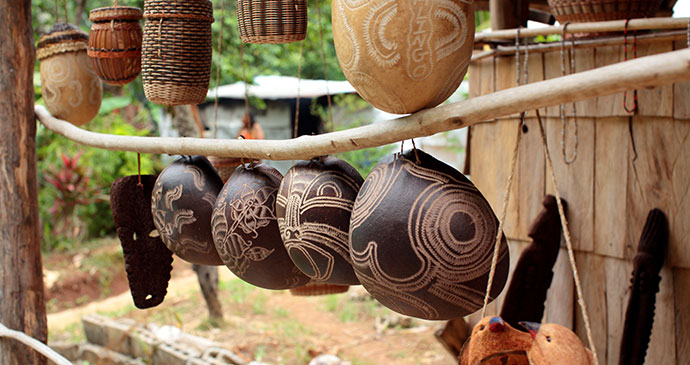 Crafts on display in the Kalinago Territory © Paul Crask

Made up of eight hamlets, the Kalingo Territory is communally owned, and in appearance, resembles the rural settlements of Dominica.

By law, the Kalinago Territory is communally owned. No one person can buy or sell part of the territory nor use it as collateral at a bank for a loan. This is often cited by Kalinago as a hindrance to both personal and business development and for this reason some are calling for statutory modifi cations or specific financial allowances to be enacted for Dominica’s indigenous people. Any Kalinago resident may stake a claim to a vacant portion of land, however, and so long as no-one else has already claimed it, and the Kalinago Council approves the claim, then that resident may build a house there and work the land. Any land which has been left untended for more than a year may theoretically be claimed by someone else, subject to approval by the Kalinago Council. 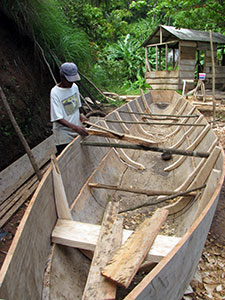 There are eight hamlets within the Kalinago Territory: Bataca, Salybia, Concord, Crayfish River, Mahaut River, St Cyr, Sineku and Gaulette River. In appearance these hamlets resemble any other rural settlements on Dominica, consisting of small houses of wood and concrete, flower gardens and vegetable plots, yet there is perhaps a more visible appearance of poverty here. Along the roadside you will see wooden stalls selling traditional larouma basketwork and various other hand-crafted gifts. Much of the interior of the territory is uninhabited, stretching from Sineku westwards across a high ridge and up to the banks of the Pagua River in the area of Charles Warner. The administrative centre of the Kalinago Territory is Salybia, which is home to the Kalinago Council and the main police station. Heading north through Salybia there is a road to the right that goes down to the Salybia Catholic Church, which was built in 1991. Its steeply pitched roof and the anchor poles that are driven deep into the ground are designed to protect the church from hurricanes. Both the exterior and interior have murals depicting Kalinago life and the arrival of Europeans. The church altar is a small hand-carved canoe.

Photo: Local Kalinago man making a canoe out of wood carved from the inside of a gommier tree © Paul Crask

Located in Salybia Bay are two islets referred to as either the Salybia Isles or Petit L’Ilet and Gros L’Illet. According to Kalinago legend, each islet was once a ship that was used to transport the spirits of dead Kalinago out to sea. It is said that on at least one of the islets there is a large steel anchor chain emerging from the rock down to the ocean floor. On a high ridge overlooking the hamlet of Bataca and the Pagua River Valley is Pagua Rock. This volcanic rock formation, some 20m in height, is said to be the home of a benevolent spirit and the steps leading up to it were once used by the people of Bataca in search of good fortune, which could be found in the form of charms on the top of the rock itself. According to legend, if you are very lucky, you may find a small white flower that only blooms one day of the year. If it is in bloom, you should rub it into the palm of your hand and then point your palm at any person you wish to command. Upon calling their name, that person will do as you wish. There is a catch, however. The rock has a number of cracks and if you were ever to catch sight of the spirit living within, you could be sure someone you knew was going to die. 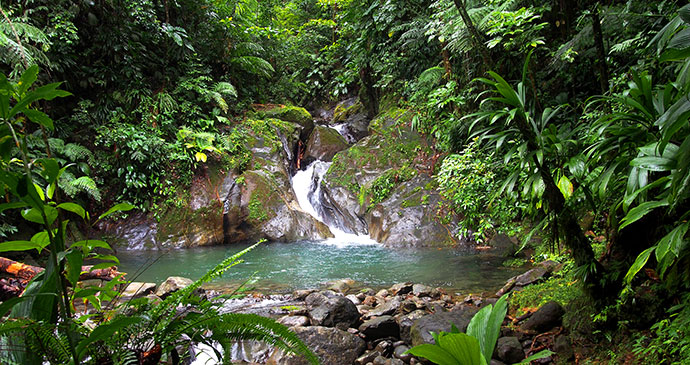 What to see and do: from the south side of the Pagua River, you can hike through the region of Charles Warner and find the idyllic and ‘secret’ rainforest pool and cascade © Paul Warner