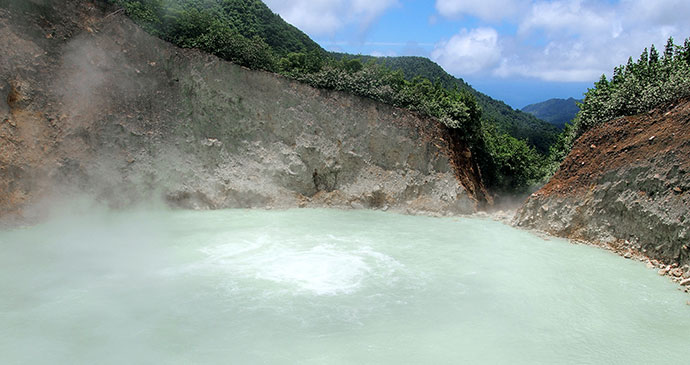 An area of extraordinary activity, beauty and life with hot steams, bubbling mud and violent vents.

The Boiling Lake is an extremely large, deep fumarole. Gases rise from a magma chamber and superheat the ground water, turning it into steam and forcing it up to the surface where it condenses to water and is trapped within a volcanic crater. The lake is also fed by streams and spills out on its eastern lip to form the White River. This activity is largely consistent but there have been episodes when activity has subsided resulting in no steam being forced to the surface and the lake’s level settling to that of the surrounding water table, thus ‘emptying’ the lake. The Boiling Lake is actually at a higher level than the surrounding water table thanks to the superheated steam that forces it up, and so when it empties due to rare lulls in volcanic activity, the water is simply finding its natural level. The last time this happened, as the lake was refilling, the water was actually cold and took around two years to get back to normal temperature.

Though Amerindians no doubt came across it earlier, the first recorded sighting of the Boiling Lake was in 1870, when a magistrate from the east-coast village of La Plaine, Mr Edmund Watt, attempted to find an alternative route across the interior of the island. After several days spent in the depths of the forest he finally arrived at the village of Laudat and reported sighting a boiling volcanic crater. Mr Watt was later accompanied by Dr H A A Nicholls and a number of porters and bush cutters to the location of his sighting, along the same route that the main hiking trail follows today. The mountains of Morne Watt and Morne Nicholls bear the names of the two men.

Tropical Storm Erika in August 2015 caused some minor damage to the Boiling Lake. The lip where it spills out to form the White River was reduced in height, resulting in the lake being around 1m lower than before the storm.