Oman is not a country to visit if you want to be overwhelmed by modern architecture or a cacophonous urban buzz. This is a country of nuances that – when knitted together – create one of those places that you wish you had visited before and will be raring to visit again. Oman is often described as a ‘new’ tourist destination, but tour groups have been visiting the country for over 30 years, and cruise ships for 20. Step back further in time and Oman has been trading with the USA since 1790, during the time of George Washington, while the first British ship to visit Oman called into Raysut Salalah in 1613, during the reign of King James I (VI of Scotland). The Omanis themselves have been just as well travelled: trade with China began at least 1,900 years ago and the Omani influence along the east coast of Africa is well known. This is a country of outward-looking people who are eager to meet those from elsewhere and proud to welcome visitors to their country.

This is a country of nuances that – when knitted together – create one of those places that you wish you had visited before and will be raring to visit again.

Despite this international outlook, Oman’s economy was moribund from the mid 19th century when Oman and Zanzibar separated in 1856, through to 1967 when oil exports commenced. This inflow of capital enabled Oman’s current ruler to speed up development from his accession in 1970 and most of what you will see in Oman dates from then. Muscat International Airport and the port of Mina Sultan Qaboos are the principal points of entry for many of Oman’s visitors and both date from the early 1970s. 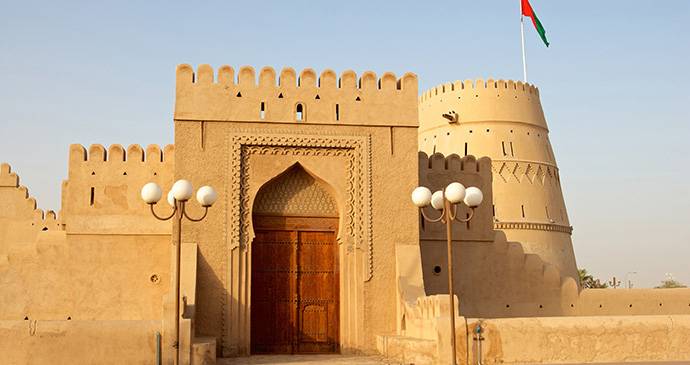 Since 1970, the country has enjoyed almost unbroken stability and increasing prosperity. Despite the dramatic recent drop in oil prices, per-capita GDP stands at over US$15,000, compared with the US at over US$55,000 and the UK at US$44,000. If purchasing power parity per person is used, Oman jumps to US$38,000; the USA remains at US$55,000 and the UK drops to US$41,000. This means that Omanis noticeably enjoy an excellent standard of living, comparable to much of western Europe. This inflow of wealth means that it’s not only Muscat that has wellmaintained roads with street lighting, but that now they extend throughout the county. In the north of Oman, an impressive, fully lit 26km road will take you from the plains up into the mountains at 2,000m. In the mountains you can relax and gaze out from the edge of a cliff into the abyss below or meander through fields of fragrant pink damask roses. From Muscat, fast ferries can take you and – if needed – your car on a sea journey to the Musandam Peninsula 400km away. Great lake-like ‘fjords’ await you with their mirror-calm waters, ideal scubadiving spots and unfrequented beaches.

Since 1970, the country has enjoyed almost unbroken stability and increasing prosperity.

Direct, non-stop flights into Oman by British Airways (Terminal 5 at Heathrow) and Oman Air (Terminal 3) mean that Muscat is an easy 7-hour flight away from the UK. Getting into the capital of Muscat is just as straightforward, with most hotels only 20 minutes’ drive away. The transport infrastructure that takes you from A to Z, with very little effort, makes it tempting not to stop and look at D and G along the way. Between Nizwa and the Wihibah Sands are plenty of fascinating villages to visit, be it the Iron-Age fortification at Lizq or the oasis and mansions of Al Mudayrib. While these settlements lack the bright lights and headline attractions of Muscat, they make for an intriguing experience and offer up lots of unexpected sights. 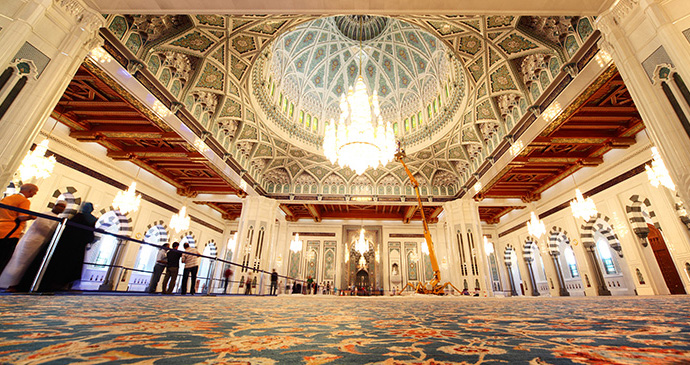 Interior of the Grand Mosque in Muscat, Oman © Tony Walsh

One of Oman’s most outstanding achievements has been in emerging from many years of conflict, poverty and national fragmentation to become the stable and prosperous country that it is today. Travelling down to Salalah illustrates how remarkable the change that Sultan Qaboos has enabled really is. Books by Wilfred Thesiger and Jan Morris, both of whom used Salalah as the springboard for their journeys, describe poverty and anxiety as part of the tapestry of Oman. Today the picture is very different, with opulent mansions radiating away from Salalah’s town centre and carefree children enjoying life in their neighbourhoods. Whether you travel alone with the Bradt guide as your companion or with a local guide, you’ll discover that what makes Oman truly special is the journey and discovering what you come across along the way.

Stepping out of the plane at what was then Seeb Airport in Muscat into the heat of a humid March day in 1986, I had little idea of what I would find in Oman. My work in Muscat meant that I travelled through much of northern Oman and met a whole range of people. At weekends I explored, taking my two-wheel drive saloon through unpaved valleys in the mountains and into the desert. The people I met were warm, hospitable and frequently astounded that a single traveller had made it into their corner of Arabia.

The people I met were warm, hospitable and frequently astounded that a single traveller had made it into their corner of Arabia.

After two years working in Saudi Arabia, I returned to Oman, which was my home until 2016. There have been vast changes in the country since I first arrived, as there have been throughout the Arab world. Oman, however, has been fortunate that a caring ruler has enabled a state that hasn’t subsumed its human population into an anonymous mass but has built their many positive attributes into the remarkable country that Oman is today.