Head inland towards Nizwa, Oman’s early capital, to get a sense of the authentic Omani character and the numerous forts that guarded their settlements. The cooler winter temperatures will be ideal for strolling round the undisputed highlights of the suqs and forts of Nizwa and Bahla, and admiring the painted ceilings of the palace of Jabrin. 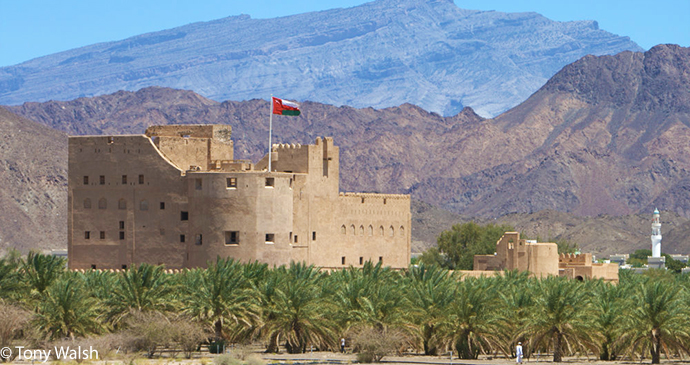 A riot of colour and activity. A month-long cultural festival held each year from late January to late February at various beach, park and shopping mall venues, showcasing Omani crafts and traditions. The whole of the ‘Capital Area’ is at its liveliest throughout this time. Oman Air offers promotional fares and the hotels often have discounted packages. 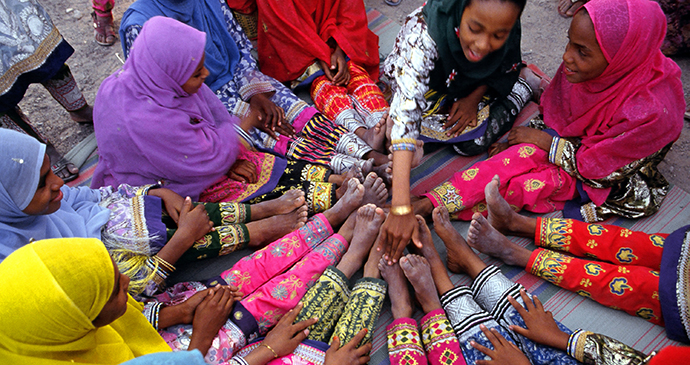 Bullfighting along the Al Batinah Coast

On Friday afternoons at round 16.00 this is the last winter month when the pampered prize-possession brahmin bulls compete in their test of strength against each other. The venue rotates between the coastal towns of As Sib, Barka, As Sawadi, Suhar and Saham, so can be combined with an exploration of the coastal forts like Barka and Suhar. No betting or prize money is a stake, only prestige for the winner. 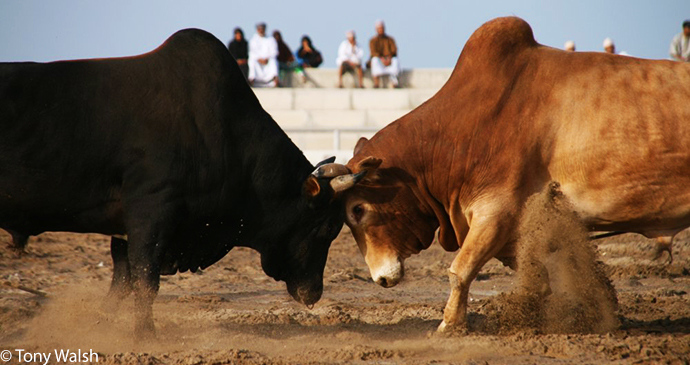 Dolphin-watching in the Musandam

Boat-trips to Fahl Island and the fjords can be arranged all year round, and dolphins have no special season, but April is a good time in the Musandam peninsula, before the summer heat has built up and when the pastures are at their greenest. The dolphins are at their most active in the early morning and at sunset.

Discover the frankincense cities of Dhofar in Oman’s deep south

The monsoon season starts in mid-June in southern Oman, making May the perfect month to visit the ruined frankincense trading cities. In their picturesque remote locations, Samharam(Khawr Rawri) and Ubar (Ash Shisr) were once thriving market places to trade the precious substance, but today they are completely devoid of commercialisation.

The steep climb in 4×4 to the Sayq Plateau is a thrilling experience. As the summer heat sets in, now is the time to head for the hills, and the noticeably cooler air of the Jebel Akhdar mountains. The terracing of the mountain villages are especially lovely, with walks through the fruit and nut trees and the famous Omani roses used for making traditional rosewater scent. 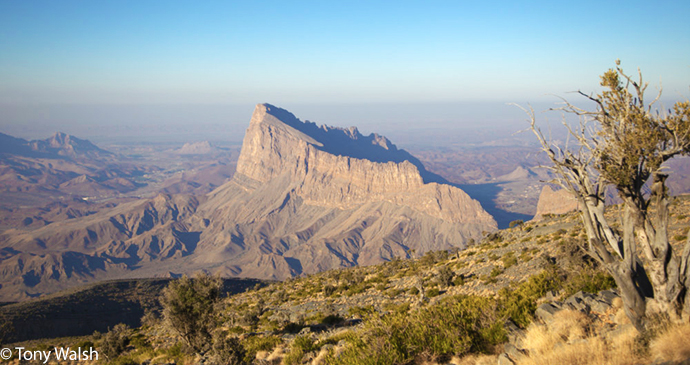 One of the stunning views, of Jabal Misht, from Jabal Shams © Tony Walsh

Jabal Shams, the Mountain of the Sun, offers unrivalled views and its own ‘Grand Canyon’. The highest summit in Oman at 3,048m is the coolest place to be at the height of summer. The fresher temperatures make it the perfect time for trekking on the way-marked trails and camping in sheltered corners. Even saloon cars can now reach the main plateau area where there are a handful of Omani-run hotels and restaurants to revive you.

Watch the baby turtles hatching and their dawn race to the sea. The summer months are generally when the turtles are at their most active, and hundreds of females come out of the sea to nest and lay their eggs in the sand at Ras Al Jinz, Ras Al Had and Masirah Island. The eggs hatch about two months later at dawn and the baby turtles can be seen in their hundreds scampering across the sand towards the safety of the sea before gulls can swoop down and catch them.

Experience the lush green landscapes that follow the monsoon in Salalah – For just two-three weeks every year the Dhofari mountains in Oman’s deep south turn a spectacular green, thanks to the monsoon rains blowing in from Africa. The wadis flow with deep rivers and spectacular waterfalls plunge over sheer cliffs. The local Khareef Festival is held annually at this time, with folk bands performing traditional song and dance, a showpiece for Omani customs and culture. 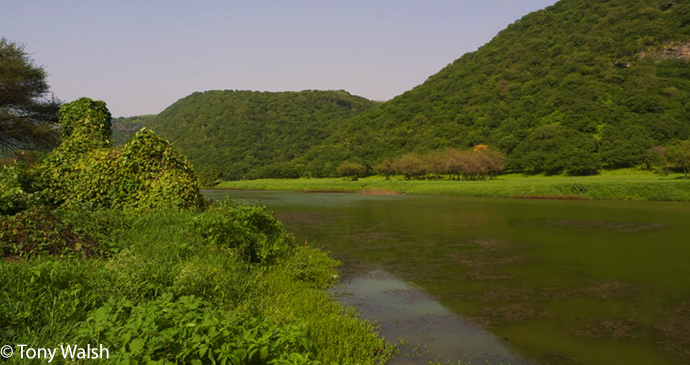 Diving in the deep south

Enjoy the beaches and coral reef diving at Mirbat and Salalah in Oman’s deep south – The monsoon rains finish in mid-September and the high seas settle down again to allow diving among the exotic coral reefs and swimming on the white sandy beaches fringed with palm trees, giving it a more African than Arabian feel.

Diving off the coast of Oman © Oman Ministry of Tourism

Celebration fireworks and high-spirited camel-racing – November 18 is the Sultan’s birthday, a one day public holiday, celebrated with dramatic firework displays and early morning camel-racing at As Sib race course. The festive mood reflects the genuine popularity of Oman’s ruler.

Camping in the deserts of Wihibah Sands

The winter months are the best for appreciating the sand dunes and emptiness of the Wihibah Sands, Oman’s own ‘Empty Quarter’, preferably with one of the specialist companies where you can have the full desert camping experience without any of the danger or fear of running out of food and water.