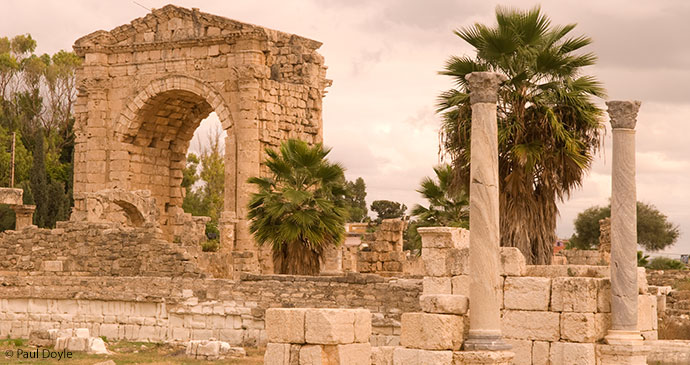 At 20m tall, the arch at Al-Bass has been beautifully restored © Paul Doyle

Tyre wears its heart on its sleeve, with effigies of the resistance movement and shops selling Hezbollah souvenirs and photos of its leader, Hassan Nasrallah, ubiquitous.

Once dubbed the ‘Queen of the Seas’ for its mercantile and seafaring activities, Tyre was previously a flourishing commercial centre for international trade and appears in the classical writings of Herodotus and Homer. Some 80km from Beirut, and a little over 40km from Sidon, Tyre today evokes a battered and slightly melancholic feel with very few traces left of its once illustrious past. As an overwhelmingly Shi’ite town, Tyre wears its heart on its sleeve, with effigies of the resistance movement and shops selling Hezbollah souvenirs and photos of its leader, Hassan Nasrallah, ubiquitous.

Although economically less developed and visited than other areas of the country, Tyre’s wealth for the visitor today lies in its still traditional and functioning fishing port, its lively and engaging souk area and its 1984 UNESCO-designated World Heritage site of Roman-era architecture. During the summer months, an international arts and music festival is held within the environs of these Roman ruins.