The Shrine Cities – Najaf and Kerbala 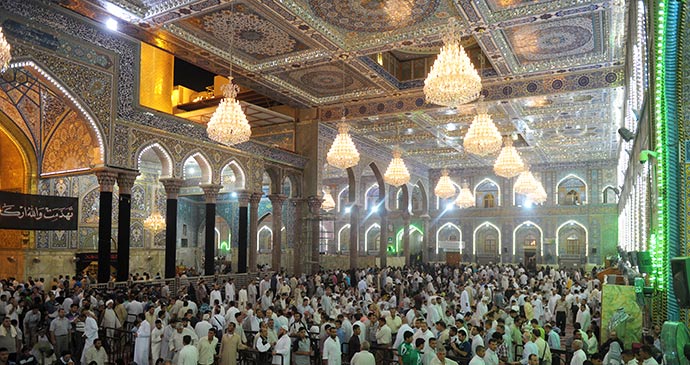 Najaf is a major city of mosques and shrines…. Kerbala emerged as a focus of devotion, particularly for Persian Shia believers.

According to tradition Ali, feeling his death approaching after he had been stabbed in the great mosque at Kufa, ordered his people to place his mortal remains on a camel and allow it to wander at random; where the camel stopped, there he was to be buried. The burial place was kept secret, and no funeral monument was raised. Home to the Holy Shrine of Imam Ali, the fourth caliph and son-in-law of the Prophet, resplendent with its golden dome and minarets, Najaf is a major city of mosques and shrines. There is no quarter or street without a mosque, either small for the locals or large and attended by visitors to the city. The city’s large cemetery (Wadi Al-Salam) is considered the holiest and most sought after place for burial among Shia believers. Najaf is also one of Islam’s most important seminary centres for the training of Shiite clergymen (al Hawzah al Ilmiyyah), and has many religious schools. Every year millions of pilgrims visit the Holy Shrine of Imam Ali, whose shining golden dome is visible from a distance of 75km away.

The first major Shrine City on the route south towards Basra is Kerbala. The name Kerbala is derived from the Babylonian word kerb (a prayer room) and El, Aramaic for God – hence God’s temple. Kerbala’s Shia sanctuaries are objects of great veneration and the city contains the shrines of Hussain ibn Ali, son of Imam Ali, and Abbas, Hussain’s half-brother. Hussain is known among Shia believers as the Prince of Martyrs (sayyid al shuhada) because he was killed in his challenge to the accession of Muawiya’s son Yazid to the caliphate. The tragic Battle of Tuff, in which Hussain and Abbas were martyred together with many others, became the most important event in Shia history and mythology. Kerbala emerged as a focus of devotion, particularly for Persian Shia believers. The city has been strongly influenced by the Persians, who were the dominant community, making up 75% of the population at the turn of the 20th century, when there were around 50,000 people in the city.