When to visit
Highlights

Summer months (May–September) are very hot and dry, especially on the Erbil Plain, often reaching temperatures of more than 45°C and sometimes as high as 50°C. It is slightly cooler in the evenings and in the mountainous regions around Dohuk and Suleimaniyah. In autumn, October and November, the weather is very pleasant and still warm enough to enjoy sightseeing. The winter months can be cool with rain and some snowfall. In the mountain regions heavy snow falls during the winter months and the temperature can plummet. The best time to visit Kurdistan is in spring, in March when people celebrate Nowruz, the New Year marked by the spring equinox. This is the time for picnics and dancing in the hills and valleys. 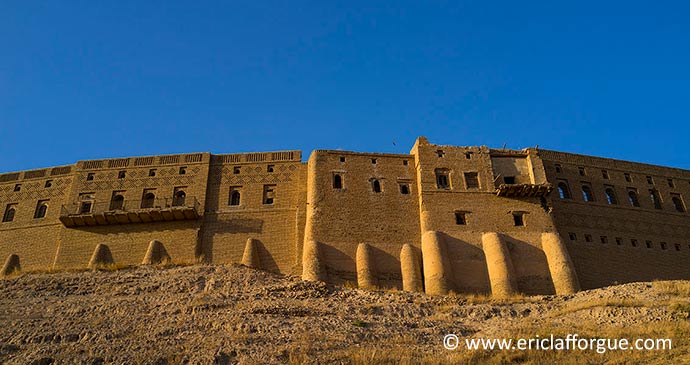 The ancient city of Erbil

Erbil is one of the oldest continually inhabited cities in the world. Brimming with history, Erbil stands as a testament to the numerous influences on the region: Turkmen, Safavid, Ottoman and British.

Some 90km northwest of Erbil is the site of the famous battle between Alexander the Great and King Darius III in 331BC, which resulted in a decisive victory for the Macedonians and led to the fall of the Persian Empire. Darius chose this flat, open plain deliberately, so that he could deploy his numerically superior forces to their best advantage. Definitely a site for history buffs, using their imagination!

A picturesque city situated in a valley surrounded by mountains, Dohuk is traditionally associated with agriculture and is locally famous for its grapes. Once known for its colourful houses, it is now more famous for its fascinating bazaar.

The temple complex of Lalish is an important pilgrimage site for followers of the Yezidi faith, who are expected to make the trek here at least once during their lifetime. The tomb of Sheikh Adi is located here in a cave which also displays various features of the religion – holy water pools, fire and further tombs of earlier holy men.

Once an almost impenetrable fortress, Amadiya is located northeast of Zakhu on a high promontory above a breathtaking landscape overlooking the Sapna river valley, which is fed by a geothermal spring originating far below the mountain. It is believed by some to be the home of the biblical Three Wise Men, who made a pilgrimage to see Jesus Christ after his birth. The town has ruins from the Assyrian era, the ruins of a synagogue and a church.

In1928, A M Hamilton was commissioned to build a road that would stretch from northern Iraq, through the mountains and gorges of Kurdistan on to the Iranian border. Hamilton overcame immense obstacles – disease, ferocious brigands, warring tribes and bureaucratic officials – to carve a path through some of the most beautiful but inhospitable landscapes in the world. Even by today’s standards it is a considerable feat of engineering.