Owing to its prosperity and natural beauty, local Iraqis and Middle Easterners are coming to the city as tourists.

Like Erbil, Suleimaniyah is a rapidly developing metropolis in Kurdistan. It is getting larger and larger, the traffic is horrendous and there are an enormous number of new cars on the road. The international airport opened in July 2006. Owing to its prosperity and natural beauty, local Iraqis and Middle Easterners are coming to the city as tourists. Suleimaniyah has strong economic ties with Iran and is a major business and commercial centre. 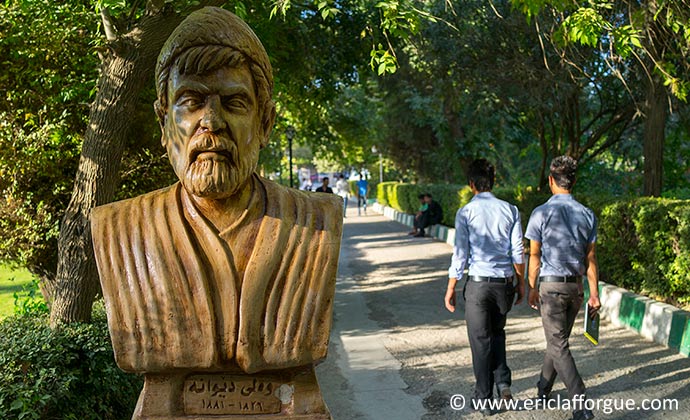 A statue in the central park © Eric Lafforgue

Overlooking the city is Asmar Mountain and the views from here of Suleimaniyah and its surroundings are breathtaking. Few cities can be seen as completely in the round as Suleimaniyah. On the top of the mountain is the Hotel Asmar. A number of small shops and restaurants can be found on the winding road leading up to it.

Suleimaniyah is becoming an important commercial centre for Kurdistan. The supporting investment laws and the quiet and peaceful nature of the city generally makes it a good base for business and makes for steady growth and expansion. Great attention is paid to the promotion of Kurdish culture. The university has a Kurdish language faculty and Kurdish poetry festivals are held here amid much fanfare. The university’s Cultural Centre is accommodated in one of Suleimaniyah’s oldest houses. It is host to a collection of traditional Kurdish artworks and folklore.