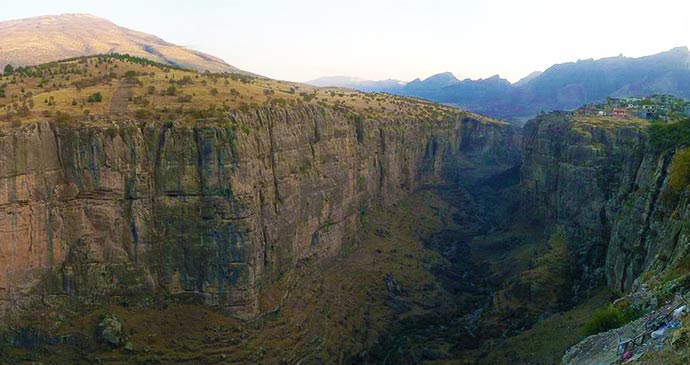 The town is also well known as the base for Sir A M Hamilton, who built the Hamilton Road and its famous bridges across the Rawanduz river.

Located 107km northeast of Erbil, the town is perched 150m above sea level, surrounded by huge mountains, Korek, Zozil and Brandasot, and spectacular valleys. It is famous for its Kurdish tribal blood feuds and as a centre of resistance to whichever government was in power. It was a base for British troops and Assyrian militia co-opted by the British in the 1920s to control the area. The town is also well known as the base for Sir A M Hamilton, who built the Hamilton Road and its famous bridges across the Rawanduz river. This road opened up the region and promoted access to the Iranian border. Today travellers and commerce travel on this road through this magnificent country.

Pank Resort, Rawanduz just above the town is the main place to stay. It offers 74 small holiday villas in a park with funfair rides and attractions, and a fine restaurant, surrounded by stunning mountain views. Rawanduz has a roller-coaster ride, known as ‘shinglbana’, found only in four other countries and consisting of 50 cabins moving on a railway. It is 1,475m long and 300m high. The cabins move down to the valley at 55kph. Along this journey one can view the Rawanduz Valley and the Bechal and Ali Bag Falls.