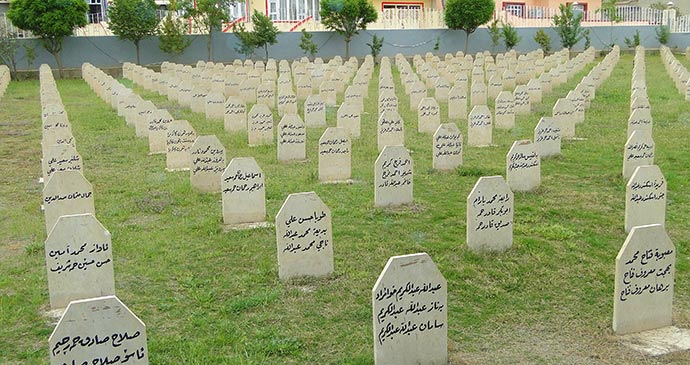 A cemetery for the 5,000 people killed in the 1988 massacre © Adam Jones, Wikimedia Commons

Just over an hour’s drive from Suleimaniyah and relatively close to the Iranian border is the town of Halabja. It was brought from obscurity by the horrific poisonous gas attack on its inhabitants during the Anfal, the anti-Kurdish campaign led by Saddam’s regime between 1986 and 1987, during the Iran-Iraq War. Altogether, there were 180,000 victims of the Anfal, civilians killed by chemical and conventional bombardments. Hundreds of villages were destroyed.

In Halabja more than 5,000 inhabitants, mostly women, children and old men, were killed in about 20 minutes on 16 March 1988. This brutal and inhuman retaliation to the possession of the town by the Iranians and Kurdish peshmerga was perpetrated by Saddam’s cousin, Ali Hassan al Majid (Chemical Ali). Unbeknown to the Iraqi command there was an Iranian news team in Halabja at the time who filmed the attack and subsequent grotesque deaths. Images of children’s corpses shocked the world. This one attack played a significant role in changing the attitudes of many, particularly those from Europe, about Saddam Hussein’s Iraq.

This one attack played a significant role in changing the attitudes of many, particularly those from Europe, about Saddam Hussein’s Iraq.

The dead were gathered by the peshmerga and Iranians and hurriedly buried in five large pits scattered around the outskirts of the town. The long-term effects of the poisonous gas were not known then and few of the bodies were identified individually. Today, the pits are marked and simply enclosed. The town cemetery, whose gate has a sign ‘Baathists should not enter here’ in English, has an area set aside for headstones marked with each family’s name, their only record.

Halabja was effectively abandoned for some time and a ‘new’ Halabja was built a few kilometres away, although this is now in decline. The original Halabja has recovered and has a busy air with many reconstructed buildings. Families take their children to play in the wooded areas near some of the death pits and life goes on.

On the 25th anniversary of the chemical weapons attack a major conference on the genocide in Iraqi Kurdistan was held in London. Nechirvan Barzani, Prime Minister of the KRG, emphasised that: ‘In Halabja, we continue to allocate land and provide house-building funds for the families of the victims.’

In February 2013 the British Government officially recognised the Anfal campaign as genocide against the Kurdish People. It has also been recognised as such by the Norwegian and Swedish governments. But despite encouraging words from the KRG the citizens of Halabja and the victims of the chemical weapons attack feel not enough has been done to assist them with health issues and to develop and modernise Halabja. On the 2006 anniversary of the gas attack, violent demonstrations erupted, with an estimated 7,000 demonstrators protesting against priorities in reconstruction, claiming that officials were not sincerely addressing the problems of the gas-attack victims. The memorial museum was set on fire.

Since those days the memorial has been completely renovated with the plaques inside repaired and restored. The gardens surrounding the memorial were landscaped and are now well maintained. Computer disks and information about the atrocity are readily available for the visitor.