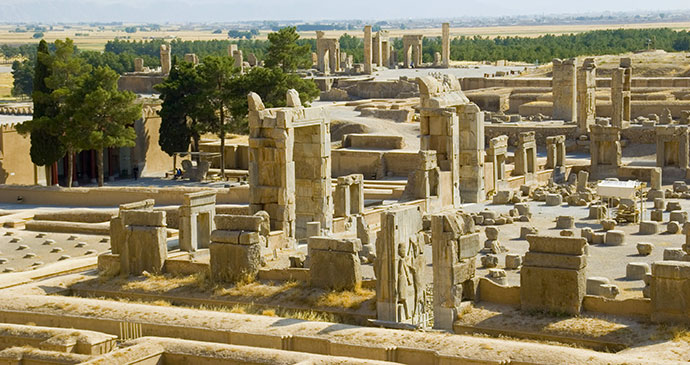 The ruins at Persepolis © steba, Shutterstock

Pass through the Gate of All Lands in Persepolis and immerse yourself in millennia of history and the passage of time.

More than any other ancient site in Iran, Persepolis (Takht-e Jamshid in Persian) embodies all the glory – and the demise – of the Persian Empire. It was here that the Achaemenid kings received their subjects, celebrated the new year and ran their empire before Alexander the Great burnt the whole thing to the ground as he conquered the world.

It was Darius the Great who began construction around 515BCE, with his successors adding buildings, but it was still unfinished when, in early 330BCE, Alexander the Great burnt it to the ground after looting the city, seven years before his death. It took him, according to Plutarch, 10,000 mules and 5,000 camels to carry away the booty from this revenge attack for the Achaemenid firing of Athens. The stone came from nearby quarries but the labourers came from all over the Achaemenid Empire including Greece, as the marks of the Greek toothed chisel testifies. Gold and silver foundation tablets (now in Tehran’s National Museum) were found on the site but more fascinating, for their wealth of detailed information, were the 30,000-odd clay tablets that were uncovered. The complex consisted of military quarters, treasury stores, small private rooms and huge reception areas, but the exact function of the complex remains an intriguing mystery. Susa was the Achaemenid winter capital and Hamadan the summer residence, while Pasagarda was perhaps built to commemorate Cyrus the Great’s victory over the Medians.