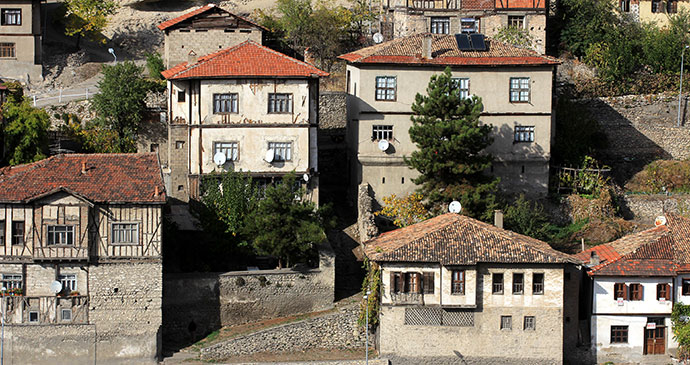 The ‘city of saffron’ is Turkey’s most complete traditional Ottoman town with streets full of timbered 19th century mansions.

Safranbolu represents a pocket of wealth built on the trade of caravans on the silk route between Gerede and the Black Sea in the 17th century. Over the course of the 18th and 19th centuries the prosperous merchants built themselves these beautiful homes, perfectly adapted to the local climate. The richest even built themselves two homes, one in the lower and rain-shadow sheltered Çarşı district for the winter, and another in the higher Bağlar (vineyards) district for the summer.

Safranbolu has what is widely agreed to be the finest collection of beautiful old Ottoman mansions in the country. They date to the 18th and 19th century and are built of timber frames which were then filled in with adobe (mud brick) and then plastered over and usually painted white but with the timbers still showing. Most are two or even three storeys tall and quite square in shape, standing detached in their own gardens. The larger mansions had ten to 12 rooms and often had internal courtyards and separate areas called selamlık, where the men received guests, and the haremlik where the women and children lived. The ceilings were often very beautifully carved and throughout the house there were decorative elements either of carved wood or plaster, according to the wealth of the owner. The Safranbolu houses also often had a revolving cupboard (donme dolaplar) between the selamlık and the haremlik so that the women could pass prepared food for guests without themselves being seen. The tiny cupboards around the rooms were designed to store the bedding during the day when the rooms doubled as living areas with seating on low benches (sedirs). Today ingenious conversions have managed to make these into tiny en-suite bathrooms, and you can see them properly if you stay in one of the hotels and pensions that many of the larger homes have now become. The household animals used to be kept downstairs in the courtyards overnight, while the living areas for the family were upstairs, often with attractive overhanging window areas supported on carved wooden corbels.