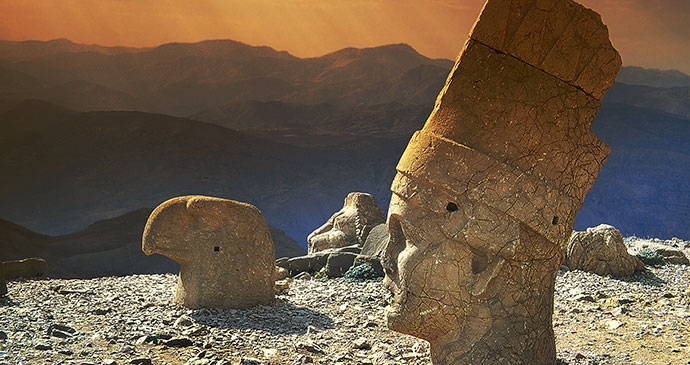 This isolated summit is crowned with the grandiose funerary statues of King Antiochus.

Along with Cappadocia and the Sumela Monastery, Nemrut Dağı is one of the best-known sites east of Ankara, and most people will have seen photos of the large stone heads on the top of the mountain. Virtually unknown until after World War II and not even mentioned in the 1960 edition of the Guide Bleu, the site was first excavated by the American School of Oriental Research in Connecticut in 1953. The first outsider to come upon it, however, was a German engineer called Karl Puchstein, who in 1881 stumbled across the statues whilst conducting transport route surveys for the Ottomans. Since the building of an approach road in the 1960s the site has been regularly visited and now, with the upsurge in visitors to Turkey, the droves of people heading up the mountain in organised minibus tours have reached the proportions of a pilgrimage.

Nemrut Dağı has almost no significance historically, being no more than a vast funeral monument to the ruler of a small local dynasty with delusions of grandeur, but for all that – or because of that – it is astonishing, unlike anything else in the world. This kingdom, extending from Adıyaman to Gaziantep, was called Commagene, and was established in the 1st century bc by a local ruler called Mithradates. The Seleucid dynasty in Syria to the south was disintegrating and the Commagene rulers managed to rule independently until ad72 when the Emperor Vespasian incorporated it into the Roman province of Syria. Cicero, Governor of the Province of Cilicia to the south, referred to the Commagenes scathingly in his letters as this ‘petty kingdom’ with its ‘petty princelings’.