The Libearty Bear Sanctuary at Zărneşti provides a refuge for bears rescued from captivity. 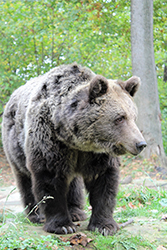 Run by local NGO Milioane de Prieteni, with support from the UK-based charity World Animal Protection, the Libearty Bear Sanctuary is a remarkable place, with some 88 bears, mostly living in three large enclosures in 69ha of oak forest. Another five smaller enclosures cater for bears with specific problems. All of the bears in the sanctuary were rescued from captivity, and many of their tales are truly harrowing, such as that of Max, the blind bear from Sinaia who for years was chained up near Peleş Castle, where visiting tourists would pay to have their photo taken with him. They are also setting up a Teddy Bear Museum here centred around two huge bears donated by British bookmakers William Hill, which were originally used in a promotional campaign to encourage punters to take a flutter on the sex of a royal baby. Other bears have been donated by celebrities ranging from Brigitte Bardot to Luna Lovegood. There are also enclosures for wolves and deer. And yes, there are bears here named both Baloo and Yogi.