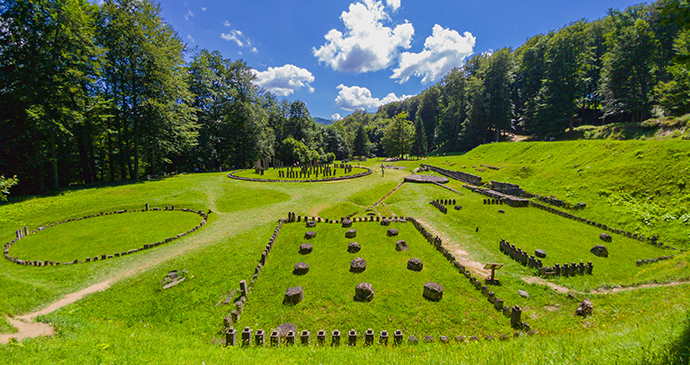 The atmospheric ruins of the Dacian capital at Sarmizegetusa © Balate Dorin, Shutterstock

The most important and by far the most visited of Transylvania’s Dacian fortresses is Sarmizegetusa Regia, some 23km south of Coştesti along a road which runs through the attractive Oraştie River valley. It was the capital of the Dacians before their defeat at the hands of the Romans. The capital was moved here by Burebista, who ruled in the 1st century BC, from the town of Argedava in present-day southern Romania, and reached its height under King Decebal a century and a half later. It was partially dismantled in AD102 by the Romans, following their victory in the First Dacian War, and definitively destroyed in the Second Dacian War in AD106. The Romans established a garrison here and later, when setting up the capital of Roman Dacia some 40km away, named it after the Dacian site, as Ulpia Traiana Sarmizegetusa.

As you drive towards the site there is a small building on the left-hand side of the road at the site entrance, offering a missable exhibition on Dacian gold. From the car park you walk up an easy cobbled path for a further 1.5km to the site itself. This brings you into the west gate of the city, and the fortress area, where the walls are constructed of large stone blocks. From here, the marked Visitor Route 1 heads down the hill beside  an ancient road paved with limestone slabs, and probably originally used for processions, to the sacred area. This is laid out on impressive artificial terraces. On the upper terrace the Large Andesite Temple displays the andesite column bases of a building which had six rows of ten columns each. A lower terrace includes a mix of rectangular and circular temple bases, including the Large Circular Temple, the focus of most of the photographs of the site, where some wooden columns have been rather speculatively placed in response to archaeological evidence of woodenposts plastered with clay. This temple dominated the sacred area, but was destroyedby the Romans. Another, smaller, circular temple lies nearby. Also on this terrace are the remains of two quadrilateral temples and the remarkable circular andesite altar, comprising a central disc surrounded by ten ‘rays’ made of andesite slabs. It is believed that sacrifices would have been performed here. On the lowest terrace, in the southern part of the sacred area, is a limestone temple, rectangular in form, with 60 circular column bases on which wooden columns once stood.

Back up in the fortress, Visitor Route 2 takes you around the fortress walls, past the south gate, returning to the main entrance.