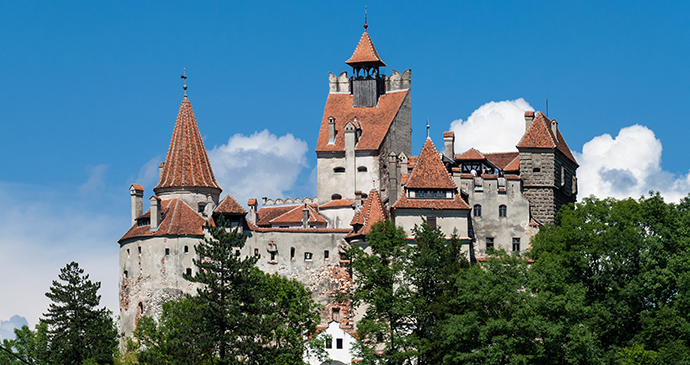 With its turrets, steep walls and imposing location atop a rocky crag, Bran Castle looks every inch the Transylvanian castle.

The chief attraction of the village of Bran, Bran Castle does not disappoint. With its turrets, steep walls and imposing location atop a rocky crag, it looks every inch the Transylvanian castle, and this is the place visitors to Romania come in order to see the real Dracula’s home. Except that it isn’t. Author Bram Stoker located the castle of his fictional Count Dracula far to the north, near Bistriţa, although he probably saw drawings of Bran in the course of his research for the book, and its striking features may have been one source of inspiration for his fictional castle. And the castle had precious little connection either with Vlad the Impaler, the historical figure most linked to Count Dracula, beyond the possibility that he was briefly imprisoned here and the fact that he passed through the area in 1459 on his way to attack Braşov. While there are displays about Count Dracula and vampires in the castle, it is best appreciated by putting Dracula to one side and focusing instead on the real history of the place, which is of great interest.