On this spur of the Taygetos are the ruins of an entire city, the old Byzantine capital of Morea. 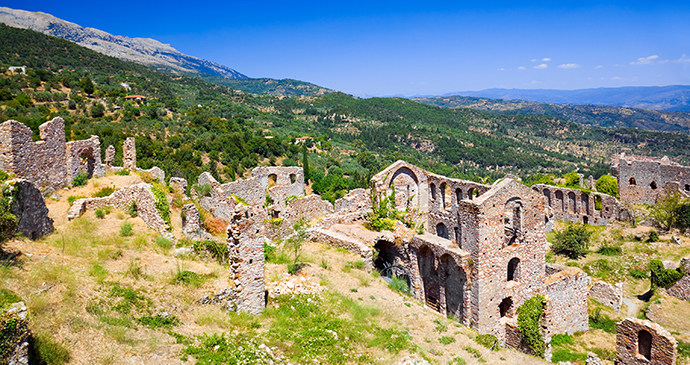 The setting of the ruins of Mystra is breathtaking © Tatiana Popova, Shutterstock

Nowhere else does the medieval, and especially the Byzantine, world seem to come alive as it does at Mystra. The setting itself is breathtaking enough. The Chronicle of the Morea, the romanticised account of the Franks in the Peloponnese, calls it a ‘strange hill, as though cleaved from the mountainside’. On this spur of the Taygetos are the ruins of an entire city, the old Byzantine capital of Morea, with its lanes and alleyways, palaces, castle and, above all, churches calling out for exploration. Even on the site’s busiest day it is not hard to find a quiet corner where you can drink in the combination of natural and manmade beauty, and try to commune with the ghosts that walk the streets of this once-great city.

Mystra is a large site, and can be tiring to visit, especially on a hot summer’s day. At the very least you will want to spend a couple of hours here, but ideally you should set aside a half, or even a full day for exploration.