There is nothing to compare with the atmosphere of sitting in this ancient theatre, watching the sun dip behind the hills.

Epidavros is most famous for its theatre, one of the best surviving buildings from the classical period. The theatre, and its surrounding sanctuary, are actually a little bit inland from the ancient city, as well as the two modern settlements that bear its name. It can be a bit confusing, so make sure you know which one you are heading for. Nea Epidavros (New Epidavros) is the more modern, and is split into two bits: one section on the coast and another above it in the hills. Some 8km to the south, and also on the coast, is Archea Epidavros (Old or Ancient Epidavros) where the ruins of the old city can be found (mostly beneath the sea). To round things off, Archea Epidavros is often referred to as Paleo Epidavros (which also confusingly translates as Ancient Epidavros).  The theatre and sanctuary are separate from either of these and are 10km inland. 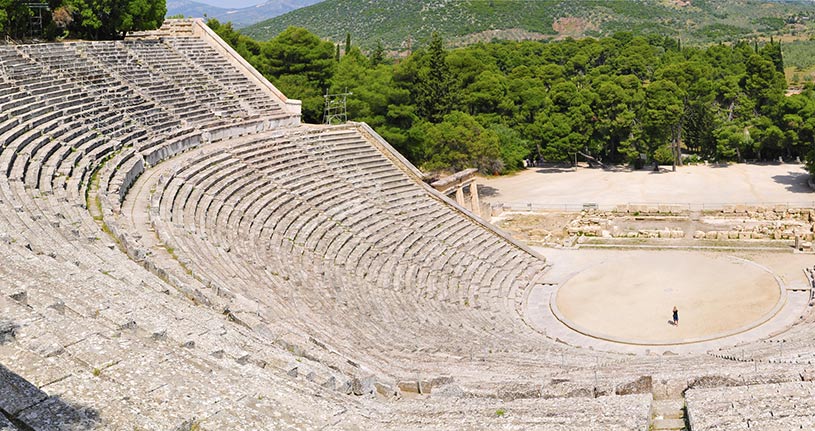 The ancient theatre of Epidavros stands as one of the major symbols of the admirable in Classical Greek art © Joop Kleuskens, Dreamstime

During July and August there are weekend performances at the main theatre by Greek and foreign theatre companies.The repertoire has been broadening recently, but the main draw is still the classical plays (done in modern Greek). Although you may not understand a word there is nothing to compare with the atmosphere of sitting in this ancient theatre, watching the sun dip behind the hills, before the lights come up and you watch the same dramas enacted that were first performed here more than 2,000 years before. It is all but mandatory to book in advance as, although the theatre is huge, parts are currently closed off for renovation, and seats are often booked up months in advance. In the cheaper seats you will be sitting on the bare stone so a cushion, if you can come by one, is a good idea. There are also performances at the small theatre in Archea Epidavros.