Cross the River Reuss as it leaves Vierwaldstättersee in Luzern by the Kapellbrücke (Chapel Bridge), one of Switzerland’s best-known sights. 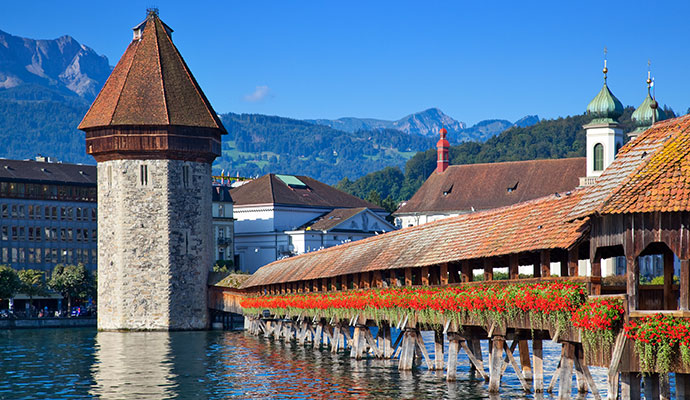 Luzern – Lucerne in French and commonly used in English – has become one of Switzerland’s leading tourist centres largely by virtue of its location. Not only is it beautifully situated in a fold of gentle hills on the edge of one of Europe’s finest lakes, it is also close to several of the country’s best-known mountains. It grew up around a Benedictine convent founded c750 and achieved some autonomy when it became a parish in 1178, but it was the opening of the Gotthard Pass to trade that acted as a catalyst to Luzern’s growth. No road existed along the lake shore until the construction of Axenstrasse in 1856, so all goods had to be shipped by barge between Flüelen and Luzern. Wealthy merchants, ambassadors, pilgrims and carriers made Luzern a place of preparation for the crossing of the Gotthard or of recovery after it. By 1450 Luzern had 400 inns.

Luzern is a compact city, and most of its principal attractions can be reached on foot or by a short bus journey. The historic core of the city is pedestrianised and a booklet of suggested walks taking in the best buildings is available from the tourist office. Besides these buildings there are scores of smaller vernacular buildings and small courtyards with fountains, which make a stroll round the traffic-free parts of Luzern a pleasure.

The station (and tourist office) is only a few minutes’ walk from Luzern’s most famous attraction, the Chapel Bridge (Kapellbrücke); from both you can see the end of the main road bridge across the River Reuss where it leaves the lake. Make for it and the Chapel Bridge is to the left. Built in the first half of the 14th century and largely destroyed by a tragic fire in August 1993, the bridge formed part of the city fortifications and was named after St Peter’s chapel at the northern end of the bridge. The Water Tower near the south end of the bridge was built c1300 and used at various times as a treasury, archive, prison and torture chamber.

Naturally the bridge had been rebuilt many times between its construction and the fire, but it was the loss of most of the paintings that decorated the bridge which was particularly sad. However, even these were the subject of repeated restoration and replacement. The originals were executed in the early 17th century and used Swiss history and Christianity as the principal themes. Although the bridge has been shortened by 44m (144ft) since it was built, it survived several threats of demolition during the 19th century. After the 1993 fire, the fabric of the bridge was restored within months, a decision being taken not to use distressed materials but to allow them to weather naturally.