Travel back in time aboard one of the five magnificent paddle steamers on Vierwaldstättersee, which provide the finest way to experience the country’s most beautiful lake.

Vierwaldstättersee, or Lake Luzern, has the reputation of being one of Europe’s most beautiful stretches of inland water, owing much to  its irregular shape, creating constantly changing views, and to the grandeur of the mountains that encompass it. The shore ranges from vertiginous cliffs to gently undulating pasture grazed by cows. Although houses cover the eastern shore for some way after leaving Luzern and there are some unfortunate stretches of road visible between Brunnen and Flüelen, the lake remains remarkably unspoilt. 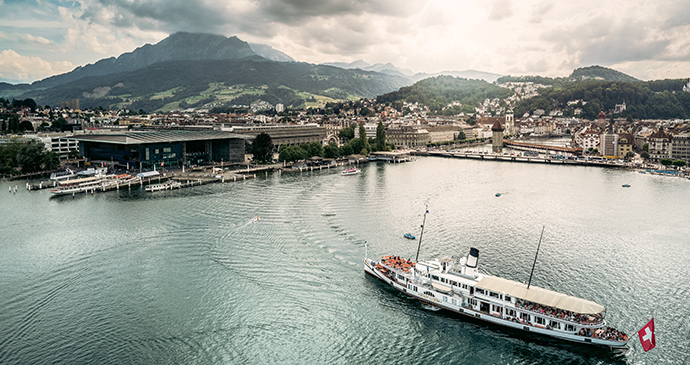 Breakfast or lunch on the paddlers is a pleasure not to be missed © Ivo Scholz, Switzerland Tourism

Although the entire lake is referred to as the Vierwaldstättersee, strictly speaking the name applies to the main body of water, the section beyond the narrows between Brunnen and Treib being known as Urner See, or the Lake of Uri, and that beyond the bridge at Stansstad being the Alpnacher See.

Its German name means ‘Lake of the Four Forest States’ referring to the country’s original cantons – Luzern, Schwyz, Unterwalden and Uri. The opening of the Gotthard Pass and the Schöllenen gorge to packhorses in 1230–40 made the lake a major artery for traffic between Italy and northern Europe. For centuries the boatmen, organised into guilds, enjoyed privileges granted by the cantons, and their business increased with the opening of a road over the Gotthard in 1830 and the subsequent mail coach services.

In 1869 they amalgamated to form the company that still runs all services on the lake. The company has the world’s largest fleet of passenger carrying ships on an inland lake, with a capacity of over 13,000 people. Besides the 15 modern vessels there are five paddle steamers: Uri (1901), which is the oldest working paddle steamer in Switzerland, Unterwalden (1902), Schiller (1906), Gallia (1913) and Stadt Luzern III (1928). Once coal-fired, all have been converted to oilfiring, but the engine rooms are open to view from a gallery above them and their immaculate condition is a tribute to the engineers who care for them. The Uri and the Unterwalden have telescoping funnels which enable them to pass under the rail and road bridge at Stansstad to reach Alpnachstad.

Two other paddle steamers survive as eating establishments: the Wilhelm Tell (1908) is moored at Luzern as a floating restaurant; and the Rigi (1848), which, unusually for a Swiss ship, was built in London by Ditchborne & Mare and now serves as a café on dry land outside the Transport Museum. Breakfast or lunch on the paddlers is a pleasure not to be missed; their Empireor Rococo-style dining rooms have been sensitively restored and the food is remarkably good. Evening dinner cruises with music and dancing are also available on modern vessels. The shipping company even brews its own craft beer; ask for the Urbräu.

The boats serve 33 points on the lake; most are substantial villages but some are delightfully small with a cluster of chalets and footpaths radiating from a tiny pier. Eight piers serve points on the Swiss Path between Rütli and Brunnen. An entire holiday could be spent using the steamer services to reach the numerous attractions around the lake.