Explore the three castles in Bellinzona, which guarded the approach to the St Gotthard Pass and have been adapted into museums and cultural centres. 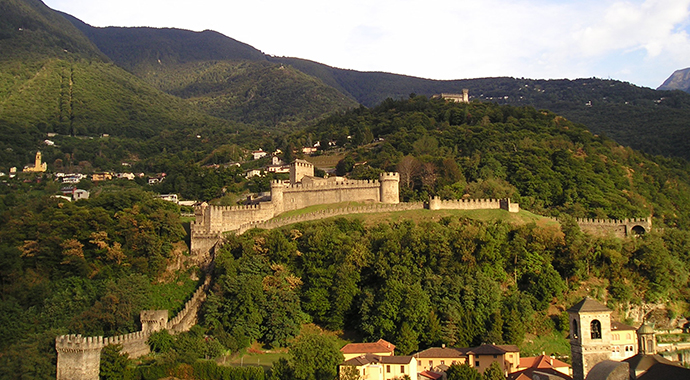 The town of Bellinzona, situated in the southern canton of Ticino, developed from Roman times thanks to its strategic position at the entrance to three passes – Gotthard, Lukmanier and San Bernardino. Beside the church is a pedestrian alley that climbs the hill to one of Bellinzona’s three castles, all of which have survived largely intact and which constitute some of Switzerland’s most dramatic military buildings. Their importance is reflected in the three being a World Heritage Site. The three are also known by the names of the three cantons which prosecuted the policy of bringing the canton under Swiss hegemony and which installed their bailiffs in them.

The Castello di Montebello (Castle of Schwyz) was begun at the end of the 13th century and progressively enlarged to consist of two multi-towered curtain walls surrounding a rectangular five-storey keep and a gatetower. The fortress’s slender and uniform machicolations belie the different building periods.

On the other side of Piazza Collegiata is Castelgrande (Castle of Uri), the oldest and largest of the three, dating from the 12th century. The castle is dominated by two tall 13th-century towers, one a keep, the other residential. The museum is devoted to interpreting the site through the 6,500 years of its occupation, from Neolithic times to the present  It has a restaurant reached by a lift shaft through the rock as well as by steps. One of its walls was built to close off the valley, being crenellated on both sides and the wall ‘walk’ wide enough for four horses to ride abreast.

The third castle, Castello di Sasso Corbaro (Castle of Unterwalden), lies outside the old town and is approached by a winding road leading to its two working drawbridges. Reputed to have been built in just six months by Sforzas following the defeat of Milanese troops at Giornico. Some walls are 4.7m thick. In the castle is a museum of folk art, including a beautiful 17th-century panelled room with stove from a house at Olivone in the Blenio Valley.