At 21.6km long, the UNESCO-listed Aletsch glacier is the longest in Europe. 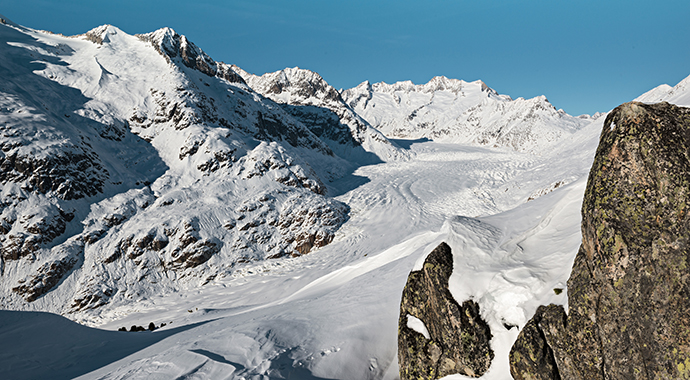 The view down the Aletsch glacier is spectacular, the great tongue of ice weaving its way downhill © Andre Meier, Switzerland Tourism

Passengers arriving at Jungfraujoch are warned of the effects of altitude on respiration and advised to walk slowly. From the glazed hall beside the station, a lift provides access to the restaurants, Ice Palace, open-air verandas, exhibition gallery, Lindt Chocolate Heaven exhibition and the glacier outside, where a team of huskies gives sledge rides. A winter garden and an extension of the High Alpine Research Station were opened in 1996, and in 2012 a 250-metre subway opened to mark the centenary, lined with alcove displays about the history of the railway and tourism in the Swiss Alps. The Jungfraujoch is also home to Europe’s highest manned meteorological observatory, which measures about 25 weather elements every 10 minutes. This information is subsequently analysed by computer, along with that from 60 other weather stations.

A multi-projector audiovisual with commentary in German or English describes the construction of the railway and facilities on the Jungfraujoch as well as the topography of the surrounding mountains. The present buildings were erected after fire destroyed the old hotel and restaurant in 1972 and incorporate the highest grid-connected solar power plant in Europe. For days when visibility is poor, the Jungfrau Panorama provides a dramatic film of what you’re missing. The view down the Aletsch glacier is spectacular, the great tongue of ice weaving its way downhill; at 21.6km (13½ miles) it is Europe’s longest glacier, stretching south towards the Rhône valley close to the Brig–Andermatt railway.

From the end of June until early October, a two-day hike over the glacier is offered to those who are fit and have a head for heights, overnighting in the Konkordia hut (grindelwaldsports.ch/en).