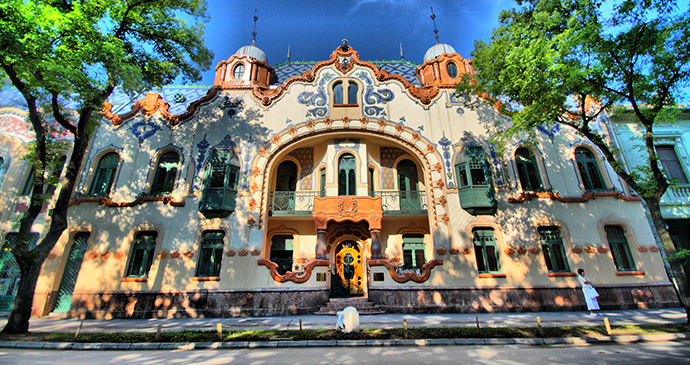 The gaudy elegance of middle European secessionist architecture is a dominant feature of Subotica’s townscape. Love it or hate it, it is the architecture of the town that is its greatest draw.

If you travel from Hungary, and particularly from Szeged, with its colourful secessionist buildings, Subotica does not come as too much of a surprise; if anything it seems more of a continuation of that which has gone before. The border does not seem to count for much here and you do not suddenly plunge into a Serbia that is culturally at odds with anything you have seen further north. There is good reason for this: like the rest of Vojvodina, Subotica has spent far longer under Hungarian control than it has as part of Serbia but, unlike most of the other large towns in the province, it has always had a majority Hungarian population as well. It remains very much a Hungarian town, even today. To complicate matters further, that which is not Hungarian in the town is almost as likely to be Croatian as it is Serbian, although this ethnic variation is nowhere near as obvious.

Subotica, the second most populous centre in Vojvodina after Novi Sad, and the administrative centre of the North Bačka district, is Serbia’s most Hungarian town by a long chalk. Signs on the street are dual-language, and many local newspapers, radio stations and television channels use the Hungarian language rather than Serbian.

The Magyar influence even extends to the food, with paprika and gulaš featuring heavily on many menus. For the visitor, the novelty of all this depends on which direction they are heading. Travelling from the south, it can come as a pleasurable jolt that Serbia suddenly seems a long way distant; that Turkish influences are nowhere to be seen, and that the hegemony of the Orthodox Church has suddenly faded away. Coming from the north, it may just seem like more of the same. Either way, the gaudy elegance of middle European secessionist architecture is a dominant feature of the townscape. Love it or hate it, it is the architecture of the town that is Subotica’s greatest draw.