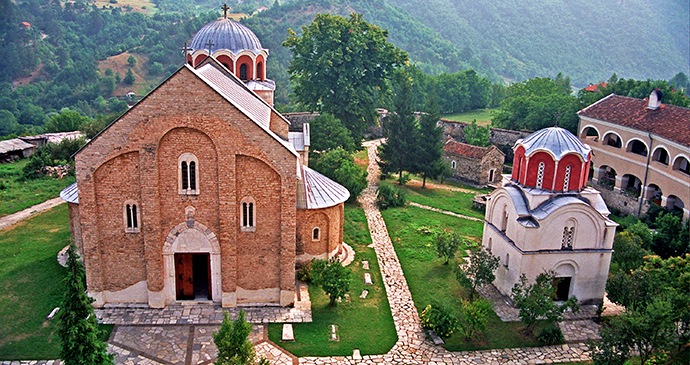 The beautiful Studenica Monastery is recognised by UNESCO as a World Heritage Site © D Bosnic, Archive of the National Tourist Organisation of Serbia

This is undoubtedly one of the country’s greatest monasteries and one of the holiest places in the Serbian national psyche.

Deliberately remote, the Monastery of Studenica sits in splendidly mountainous surroundings, high above the river that bears the same name, and even higher above the Raška Valley, a dozen kilometres to the east. Originally established by Stefan Nemanja at the end of the 12th century, this is undoubtedly one of the country’s greatest monasteries and one of the holiest places in the Serbian national psyche.

The monastery consists of three churches within an oval walled complex (originally there were nine). The largest of these, and central to the complex, is that of the Church of Our Lady (Bogorodičina crkva), completed in 1196. This church, the prototype of the Raška School, takes its influence from both Romanesque and Byzantine sources. The exterior is of polished marble, unique in Serbian medieval architecture, with elaborately sculptured leaves, figures and mythological beasts in the Romanesque style decorating the windows and doorways.

Most of the original frescoes, completed in 1209, and probably the work of a single artist, were repainted in 1569. They are divided into an upper part that has a gilded background, a middle part with a yellow background and a lower part, with a blue background. The work reflects a development in the Serbian tradition in which there is an increased emphasis on the human form, its physical strength and its definition of character.