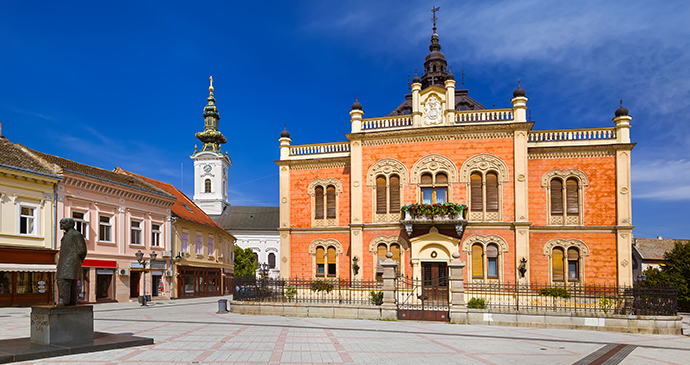 Capital of Vojvodina and, with a population of more than a quarter of a million, Serbia’s second-largest city, Novi Sad is a relatively prosperous, commercial, industrial and university town on the north shore of the Danube in the Bačka region of the province. Long referred to as the ‘Serbian Athens’, Novi Sad has always been a centre of culture and learning and the atmosphere of its small but elegant city centre seems somehow a little more refined than that of the capital. Instead of looking south and east as Belgrade has historically done, Novi Sad’s cultural ties are firmly to the north and west.

With a diverse and mixed population of Serbs, Hungarians, Croats and Slovaks, together with a sizeable but rather downcast Roma population, the city’s cultural resonances bring to mind Budapest and Vienna rather than Belgrade or Sarajevo. As one writer has already noted, Novi Sad can be said to be the most easterly city in western Europe, and the most westerly city in eastern Europe. Famous sons – or rather, daughters – of the city include Mileva Einstein, née Marić, wife of Albert (the great man himself lived here for a few years before World War I), and Monica Seleš, former world number one tennis star.

The city’s most striking feature, the Petrovaradin Fortress, is not in Novi Sad itself but across the Danube in the separate town of Petrovaradin (which belongs to Srem rather than Bačka). Three bridges link the two sides of the river and, although all of these were destroyed during the hostilities of 1999, they have all since been replaced. The city centre has a number of noteworthy buildings, mostly in the Baroque style, together with some excellent museums and art galleries. It is also a very lively city, with a large student population and a dynamic café-bar scene. It is quite feasible to visit the city as a day trip from Belgrade if time is short but a longer stay here will pay dividends. Not only are there various sights in the city to enjoy, Novi Sad also serves as an excellent base for trips to other parts of Vojvodina, as well as excursions into the Fruška Gora hills that lie just to the south.