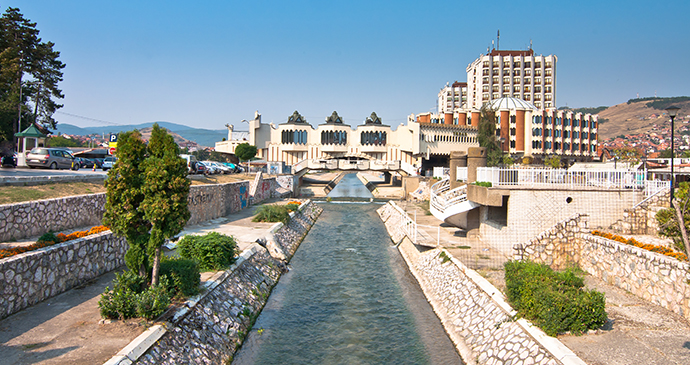 This is one of the most interesting towns in the country, which makes it all the more mysterious why there is so little information about the place.

Sitting among low hills where the River Raška has its confluence with the Ljudska, is the large town of Novi Pazar (New Bazaar). Almost immediately upon arrival you notice how different it seems from similar-sized towns to the north like Kraljevo or Čačak. Novi Pazar is the town with the most pronounced Islamic atmosphere in the country: instead of church domes, it is minarets that stab the skyline, and rather than the relaxed and carefree mixing of the sexes that takes place throughout most of Serbia, men and women seem to live more separate existences here. Almost everywhere you look there are coffee houses full of huddled groups of men drinking small glasses of čaj or turska kafa, talking and playing backgammon in a haze of cigarette fog. Even without the existence of mosques and old Ottoman buildings, such characteristics give evidence that this is still very much a Turkish town and, despite the worst excesses of 1970s Yugoslav town planning, modernisation has failed to destroy the distinctly Muslim character of Novi Pazar. Having said all of this, it is important to note that the town also possesses three extremely important historic Orthodox buildings in its immediate vicinity: tangible reminders of Raška’s pre-Islamic period – the Church of St Peter, St George’s Pillars and Sopoćani Monastery.

In some ways this is one of the most interesting towns in the country, which makes it all the more mysterious why there is so little information about the place. The reason for all this is most probably political. There is a palpable nervousness about what might happen in Novi Pazar in the future. Having had its religious institutions secularised, and its town centre ripped apart by Yugoslav town planners in the 1960s and 70s, much of Novi Pazar seems keen to return to its Turkish roots in the post-Milošević period.

True to its Ottoman roots, the town today feels more like Turkey than anywhere else in Serbia; indeed, it is probably closer to old Turkish traditions than a lot of Turkish Mediterranean towns that have embraced mass tourism in recent years. Until recently, the town was probably most famous for its textile industry, particularly for the manufacture of denim jeans, which it churned out in great quantity and in a variety of guises and fashion labels, genuine and otherwise.