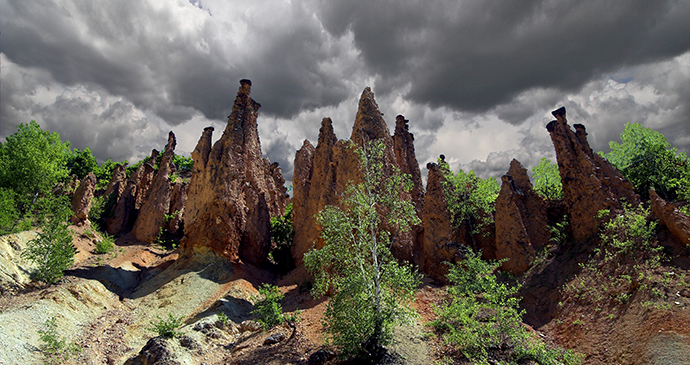 Đavolja Varoš has given rise to various legends that range from God petrifying guests at an incestuous wedding to the rocks being devils that have been turned to stone.

Đavolja Varoš (Devil’s Town) is the name given to a strange and surreal collection of rocks that constitute what is perhaps Serbia’s most intriguing natural landmark. Those who have seen Turkey’s Cappadocia region will have some idea as to what to expect, although the rocks here are smaller and cover a far less extensive geographical area than their Turkish counterparts. They are, nevertheless, highly impressive and well worth the effort it takes to reach them.

The rocks that constitute the ‘Devil’s Town’ are actually a tightly packed group of over 200 unusual stone formations created by the dual processes of weathering and erosion. Individual stone formations range from between 2m and 15m in height and each is capped by a flat stone of a different colour to create a spindly mushroom effect.

The geomorphological conditions that create formations such as these are extremely rare, hence the relatively small number of similar sites throughout the world. Put simply, they are the result of the action of very acidic water with high mineralisation on easily eroded soft rock that has a harder layer on top. Naturally enough, these unusual formations have given rise to various legends and folk myths that range from God petrifying guests at an incestuous wedding to the rocks being devils that have been turned to stone.