Sheltered at the top of the Thermaic Gulf, Thessaloníki (or Salonica), with a population of over a million in the metropolitan area, is the second city of Greece. But you’ll rarely hear Greeks indulge in the banter that often characterises the relations of first and second cities, like Barcelona and Madrid, or Rome and Milan; in fact, many Athenians readily admit that Thessaloníki is a much nicer place to live, where life unwinds at a less hectic pace (its motto is χαλαρά (chalará) or taking it easy).

Many of the 150,000 university students who come here to study never leave, adding to its vibrant cultural life, its great bar and restaurant and festival scene, and sizzling nightlife. Thessaloníki boomed in the Middle Ages while Athens snoozed, and its most compelling monuments are Byzantine: 22 churches still stand, several of which – the Rotonda, Ósios David, Ag Dimítrios, the Panagía Acheiropoiétos, Ag Apostóli and Ag Sofía – are UNESCO World Heritage sites. 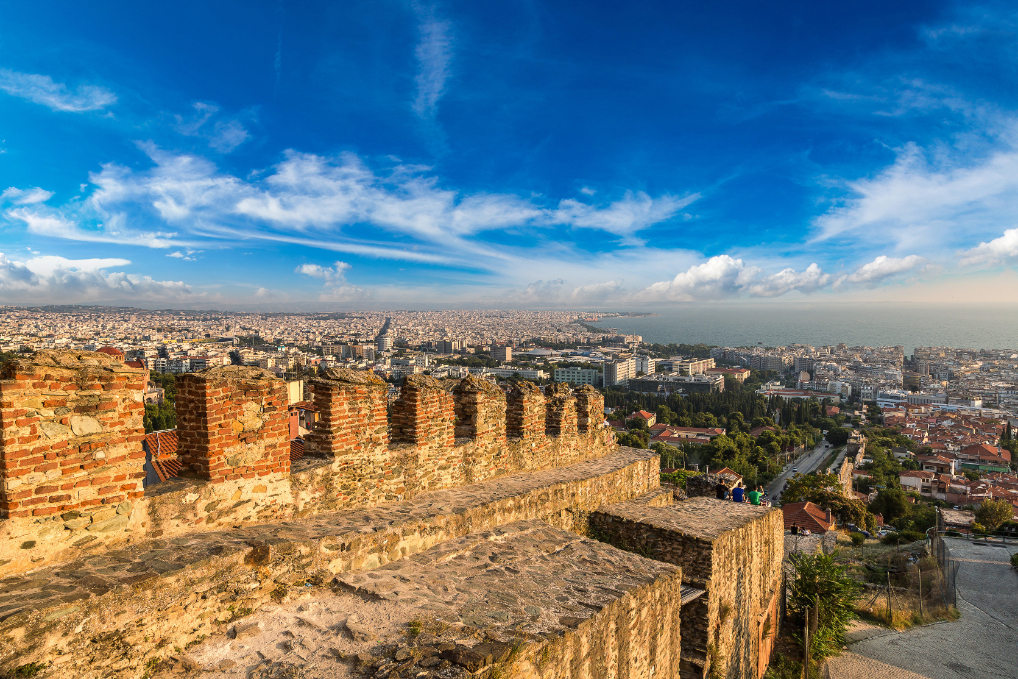 The upper city, the main Muslim district in Ottoman times, is cocooned in towering late Roman walls, while the lower city stands on tiers like a choir singing to the sea. Thessaloníki has always been cosmopolitan: it’s the only European city to boast an urban population for an uninterrupted 2,500 years, one that has known great joy and great darkness, too.

Thessaloníki is one of the few Greek cities to know its birthday – 315bc, when King Cassander founded a new city named after his wife (see box, page 54). To populate his foundation, Cassander used carrots and sticks to relocate the inhabitants of 26 older towns in the area, the largest of which, Therme, gave its name to the Thermaïkós Kólpos, the Thermaic Gulf.

Thessaloníki only really blossomed after the Romans conquered Macedon in 146bc, and blazed the Via Egnatía – the extension of the Via Appia and first Roman road outside of Italy, from Albania to Byzantium – and developed Thessaloníki into a commercial and military port. Cicero was exiled here in 58bc, and in ad42, after the Battle of Philippi, the city was declared a free city by the victors, Antony and Octavian.

St Paul came in AD50, and later addressed two epistles to the church he founded. In the late 3rd century ad, as the vortex of the empire moved away from Rome, Emperor Galerius made Thessaloníki his capital. Although the city was disappointed when Constantine rejected it in favour of the puny town of Byzantium for his ‘new Rome’, Constantinople, he did finance a new artificial port as compensation. Theodosius I the Great (ad379–395) often made Thessaloníki his base and built its mighty walls; in ad380, when he thought he was dying, he converted to Christianity and issued the Edict of Thessaloníki, supressing paganism and banning the Olympics.

By Justinian’s time, Th essaloníki was the symvassilévousa (co-reigning city) of the Byzantine Empire, much visited for its trade fair and the relics of its patron saint, Dimítrios. It remained a Greek outpost even aft er the Avars and Slavs occupied the rest of Macedonia; in the 9th century ad it became the cultural centre for the entire Balkan region aft er two Th essalonian brothers, Methodius and Cyril, converted the Slavs to Christianity and created an alphabet for their language. Its prosperity attracted unwelcome visitors, too: among them the Saracens, who captured and sold off 22,000 inhabitants as slaves in ad904. Aft er the Fourth Crusade in 1204, the city briefl y became the capital of the Latin kingdom of Thessaloníki before returning to the Greeks.