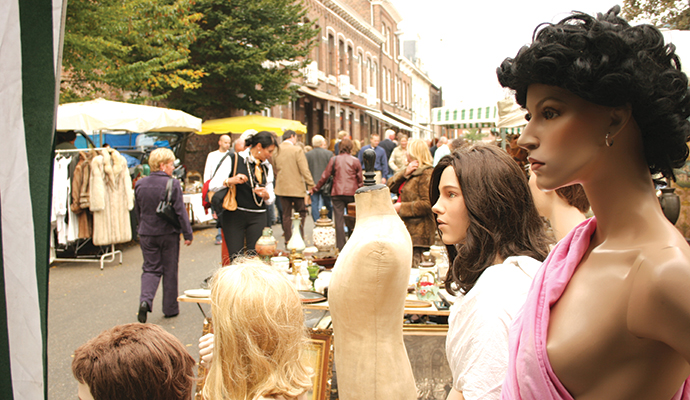 In Flanders’ oldest city, shop for trinkets at the 300 stalls of its huge antiques market.

Flanders’ oldest city, Tongeren was home to the Eburones, a Gallic tribe who protested furiously when the Romans arrived and tried to take over. Their king, Ambiorix, rose to fame for his bravery on the battlefield and even impressed Julius Caesar, who described him in his memoirs as the ‘bravest of all Gauls’. Of course, this didn’t stop Caesar crushing the tribe and forcing them into slavery. Ambiorix managed to escape and, consequently, is embraced as a Flemish hero. The Romans named the town Atuatuca Tungrorum, and when Brussels was still no more than a few dirt lanes, Tongeren was a bustling Roman trading outpost connected to the imperial highway. It was also one of the first towns in the Low Countries to adopt Christianity after the appointment of Bishop St Servatius in ad342. Under the protectorship of Liège, it continued to thrive, allowing for the construction of the medieval city walls. However, a huge fire reduced the centre to rubble in 1677, and the town didn’t enjoy a revival until Belgian independence in 1830.

Today Tongeren is an instantly likeable place which has embraced its Roman history with gusto. It now boasts one of Europe’s best museums and the largest antiques market in Benelux (07.00–13.00), with 350 stalls and 40 shops spanning Leopoldwaal, Clarissenstraat and Maastrichterstraat on Sundays, and a huge covered antiques hall near the Moerenpoort. The tourist office has a free brochure pinpointing all the stalls. Expect to rub elbows with experts and amateurs from around the world.