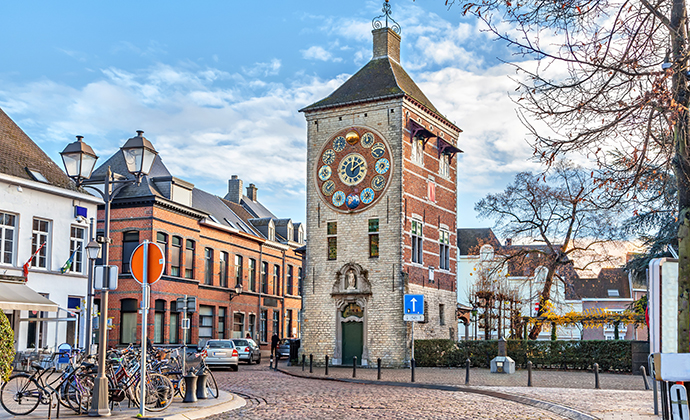 Lier’s hand-built Zimmertoren features 13 clocks, which tell you everything from the tides to the phases of the moon © Sergey Dzyuba, Shutterstock

You shouldn’t miss Lier’s pride and joy, a 90-year-old clock tower known as the Zimmertoren.

It’s a hard heart that isn’t charmed by Lier. This small town, equidistant between Antwerp and Mechelen, is officially older than Brussels, having received its town charter in 1227, 15 years prior to the capital. It was also the stage for one of the most famous marriages in history. To prevent arguments breaking out between the competing cities of Ghent, Brussels, Bruges and Antwerp, it was decided that Philip the Fair and Johanna of Castille would marry in Lier. The story goes that they fell in love at first sight – she was 16, he was 18 – and Philip insisted that the marriage took place that very evening, presumably so the lustful teenager could consummate the marriage as soon as possible! Among their six children was Charles V, who would rise to become Holy Roman Emperor.

The town has a strong association with lace – between 1820 and 1950 3,000 women were employed at home making it – and you can watch local lace-making clubs hard at work in the pretty béguinage. You also shouldn’t miss Lier’s pride and joy, a 90-year-old clock tower known as the Zimmertoren. If you can, visit in spring when the surrounding orchards are in full bloom and a racing-pigeon market animates the Grote Markt on Sundays (until mid-April) – such markets are very rare these days.