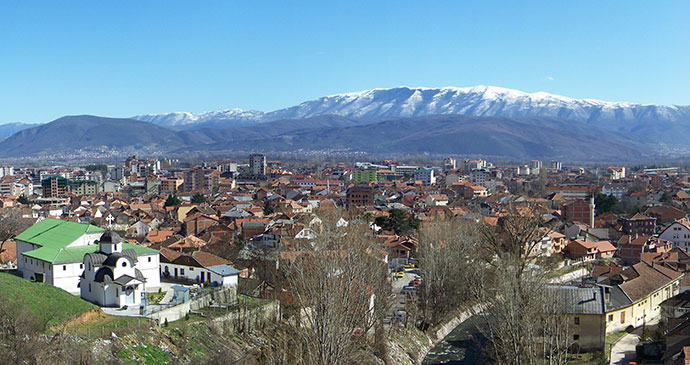 A visit to the lovely town of Tetovo offers the opportunity to take in some stunning mountain scenery © vesnickamarkoska, Flickr

Towering above the town, covered in snow until July and as early as September, is North Macedonia’s second highest mountain, Titov Vrv (Tito’s Summit, 2,748m).

Bisected by the Pena River some 40km west of Skopje, Tetovo is a substantial and lively university town with an estimated population of 70,000. The atmospheric old town, flanking the Pena, is lined with jewellery shops, old-fashioned tailors and boutiques selling modern and traditional clothes, and it also houses a museum and art gallery, and a number of historic mosques and churches, most famously the colourful 15th-century mosque known as Šarena Džamija. Other worthwhile historical sites in Tetovo include the well-tended complex of early 19th-century Islamic buildings known as Arabati Baba Bektaši Teke, and an impressive hilltop fort.

Tetovo is also the gateway to the Šar Mountains and to the popular Popova Šapka ski resort. Towering above the town, covered in snow until July and as early as September, is North Macedonia’s second highest mountain, Titov Vrv (Tito’s Summit, 2,748m). This is in fact the highest mountain that lies completely in North Macedonia; the higher peak of Mount Korab (2,764m) lies further to the south above Lake Mavrovo on the border with Albania.

Nestled close to Kosovo and Albania, Tetovo is the de facto capital of North Macedonia’s significantly sized Albanian minority. It is also the headquarters of the main Albanian-centred political parties, the Democratic Union of Integration and the Democratic Party of Albanians. Just outside Tetovo is the South East European University, North Macedonia’s third-largest university after Skopje and Bitola.