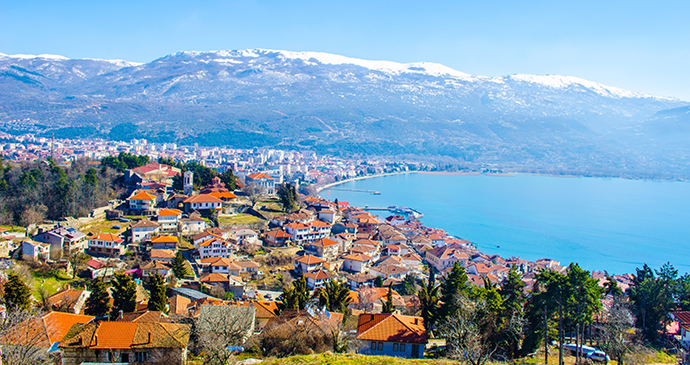 Enclosed on all sides by pretty green mountains whose peaks are brushed white with snow in winter, Lake Ohrid is noted for its beaches and transparent clean blue water.

Ohrid is the jewel of the Macedonian crown. Both the lake and town of that name form part of the country’s only UNESCO World Heritage Site, which was inscribed as a mixed natural and cultural property in 1997 in recognition of its rare environmental and historical significance. And not without reason. The oldest continuously existing lake in Europe, Ohrid formed in a geotectonic depression around five million years ago, placing it in the same ranks of antiquity as lakes Baikal (Russia), Tanganyika (East Africa) and Titicaca (Peru/Bolivia). Extending over 358km², it is the deepest lake in the Balkans, with a maximum depth of 288m, and some scientists regard it as the world’s most biodiverse water body of comparable size, hosting more than 200 endemic species, most famously the heavily fished Ohrid trout (Salmo letnica).

The lake’s principal port town, also called Ohrid, sprawls picturesquely across the hilly northeastern shore. One of the oldest continuously occupied towns in Europe, with roots going back to Neolithic times, it’s renowned for the old churches and traditional architecture that characterise its atmospheric old town. The most important tourist focus on the lake, the town is serviced by a large and varied selection of hotels, restaurants and other amenities catering to domestic and foreign visitors alike. And although it can get very busy during July and August and over long weekends, the old town is much quieter and cheaper on weekdays and out of season.

Enclosed on all sides by pretty green mountains whose peaks are brushed white with snow in winter, Lake Ohrid is noted for its beaches and transparent clean blue water, which offer ideal swimming conditions in the warm Balkan summer, as well as some great diving and sailing opportunities. Points of interest include the little-visited but quaint port town of Struga on the northern shore, the historic Monastery of Sv Naum and associated lake springs near the Albanian border, the tiny cave churches at Kališta and Radožda, and tranquil lakeshore villages such as Trpejca, Peštani and Lagadin. Lake Ohrid is also the obvious base from which to make day trips by jeep, donkey or foot to the characterful old mountain villages of Oktisi and Vevčani, or to go caving, hiking and paragliding in the scenic Galičica National Park.