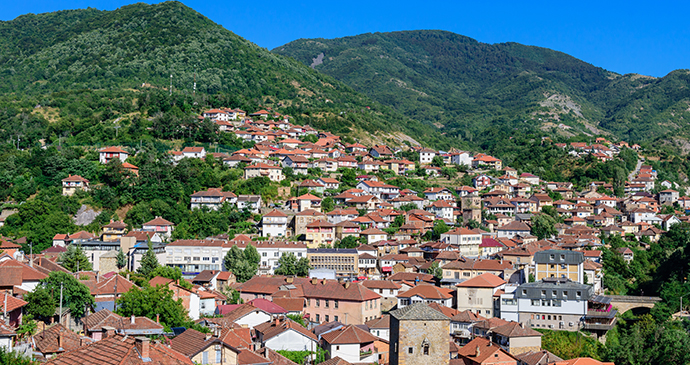 Not to be missed is the scenic small town of Kratovo, which is nestled in an extinct volcanic crater © Thomas Dekiere, Shutterstock

The crater-like hollow of the village has demanded high-arched bridges to cross the river and ingenious architecture to scale the steep ravine.

Midway between the start of the E871 (Highway 2) at Kumanovo and Kriva Palanka is the turn-off for Kratovo and Probištip, which joins Highway 2 to Highway 27. On this road, deep in the belly of an ancient and burnt-out volcanic crater, is the small village of Kratovo, a great base to explore this little-visited but fascinating region of North Macedonia.

In Roman times this mining town was known as Kratiskara, meaning ‘crater’, and variations of its name, Koriton and Koritos in Byzantine times, have centred around this meaning. The crater-like hollow of the village has demanded high-arched bridges to cross the river and ingenious architecture to scale the steep ravine. The difficulty of getting to Kratovo has also left the town relatively free of communist concrete. Six defensive towers hark back to the time of King Karpoš. At its commercial peak in the 19th century, Kratovo was reputedly the only town in North Macedonia to support distinct but harmonious Orthodox, Catholic, Muslim and Jewish communities, each of which had its own quarter – these are still recognised today, though boundaries have blurred in recent decades.