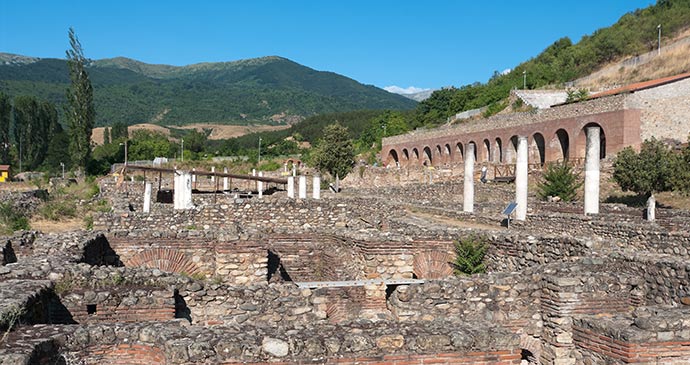 Only a small part of the old town has been uncovered and excavated, so visits in future years should prove ever more fruitful.

Founded by Philip II in the 4th century BC and an active centre of trade for another eight centuries afterwards, this once-significant town on what is now the southern outskirts of Bitola rivals Stobi as the most worthwhile Roman-era archaeological site in North Macedonia. Only a small part of the old town has been uncovered and excavated, so visits in future years should prove ever more fruitful, especially as historical records show that there are still a number of houses and tombs of the rich and famous at the time to be found. Several important relics and buildings have already been uncovered including the amphitheatre, baths, basilicas and some impressive mosaics, only some of which are on show in the summer. There is a small museum, a snack and drink shop, and a souvenir shop with books on the site in English available for sale. Most of the more important statues are on display in the town museum or in the National Museum in Skopje.

The site lies about 2.5km south of the town centre, a 25–30-minute walk depending on where you start. To get here, follow the pedestrianised Maršal Tito Street south across Partizanski and through Bitola Park until you reach a T-junction in front of a car park. Turn left here, then continue for 100m to another T-junction where you need to turn right on to Ivo Lola Ribar Street. Shortly after this, immediately past the Belcom supermarket, turn right on to the (indistinctly signposted) 500m feeder road that leads to the archaeological site. If you don’t feel like the walk, a taxi shouldn’t cost more than 100MKD.

Considerable archaeological work continues here every year, and for those who wish to take part, the Balkan Heritage School has organised volunteer workshops here in recent years.