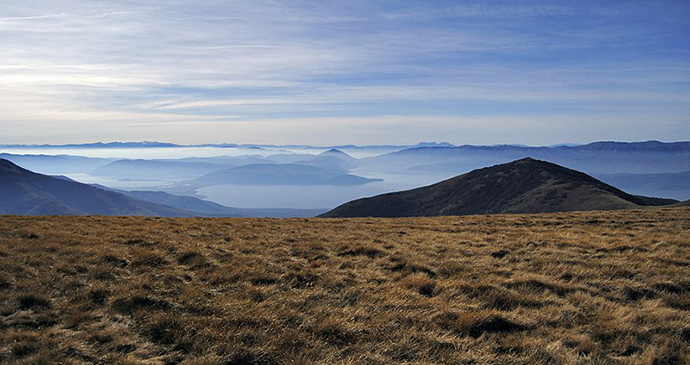 Pristine and picturesque, it has an idyllic location away from the hustle and bustle of city life, and is protected by the Baba massif, with a view on to Lake Prespa.

The traditional village of Brajčino, perched on the edge of Pelister National Park less than 5km from the border with Greece, can claim to be the first ecotourism initiative in North Macedonia. Pristine and picturesque, it has an idyllic location away from the hustle and bustle of city life, and is protected by the Baba massif, with a view on to Lake Prespa. It offers good access to the glacial lakes atop the range and from there to Pelister summit and the mountain huts. It is easily accessible by car, or by bus from Bitola (two daily) or Resen (several daily). It is also the starting point for the longer day or overnight hike to Hotel Molika via Pelister National Park.

Formerly a rich trading village, Brajčino still has a small population of mixed ages despite the emigration of many of the villagers in the middle of the 20th century to Canada and Scandinavia due to a lack of employment or in order to escape communist persecution. However, the departure of most of the business know-how from the village has left it in hard times, even more so since the break-up of Yugoslavia which has taken its toll on the village’s formerly prosperous apple trade. Previously, apples from the area would be sold as far away as Zagreb and Ljubljana, whereas new borders and taxes have all but eliminated the apple export. Today, the villagers, through the help of Swiss funding and the local non-governmental organisations of DEM (Ecological Movement of Macedonia) and BSPM (Bird Society Protection of Macedonia), are reviving the local economy by offering visitors access to their pristine lifestyle in return for keeping it so. Ten percent of the income of the guides, accommodation and the village shop is reinvested into preserving the local area.

About 3km before the road arrives at Brajčino, it weaves through Ljubojno, a larger village comprising a similar style of traditional stone houses, together with a few 19th- and 20th-century town houses on the central square. Clearly seen above the village are the two churches of Sv Petka and Sv Pavle, which vigilantly watch over Ljubojno.