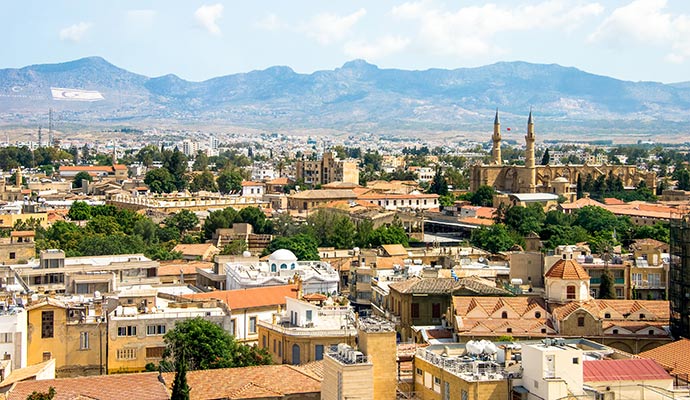 With its medley of Christian and Muslim, cathedrals turned into mosques, Greek foundations topped by Turkish roofs, churches reworked as public baths, archbishops’ palaces reincarnated as municipal offices, Lefkoşa is a memorable day out.

In the featureless Mesaoria Plain that surrounds Lefkoşa, there is little to detain the visitor. Lefkoşa itself is the worthwhile destination, with a fascinating collection of Crusader Gothic and Turkish Ottoman monuments set within the old Venetian fortifications. Selimiye Camii and the cluster of half-a-dozen or so buildings in this immediate area form the heart of old Lefkoşa. They were nearly all originally Christian Crusader structures, converted by the Ottomans in the 16th century to Muslim or secular functions. Lefkoşa was the Gothic capital of the Lusignan kings, and they graced it with magnificent palaces, churches and gardens. Much was destroyed in pillaging through the centuries by Venetians, Genoese, Egyptians and Turks, and earthquakes helped wreak the final havoc. The end result, with its medley of Christian and Muslim, cathedrals turned into mosques, Greek foundations topped by Turkish roofs, churches reworked as public baths, archbishops’ palaces reincarnated as municipal offices, is what makes Lefkoşa memorable today.

Anyone who is attracted by things Turkish should spend a day in Lefkoşa. Here, within the walls of the old city, are the island’s major Ottoman monuments, many of them either still in use, or renovated (or being renovated) as museums. Lefkoşa is divided into Greek and Turkish sectors by the euphemistically named ‘Green Line’, erected by the UN, an ugly barrier built from barbed wire and corrugated iron, cutting across the heart of the old walled city. (The Green Line gets its name from the fact that it was originally drawn on a map in green ink by a British army officer.) The sight of streets barricaded and houses bisected has a certain eerie fascination and few will visit Lefkoşa without taking a look at the Green Line. Of course, it’s now possible to cross over to the south, and those that do so will be struck by the difference. Where Turkish Lefkoşa retains an old-world charm and sense of individuality, Greek Nicosia has rapidly pursued the EU dream, with a liberal sprinkling of international coffee shops, highstreet boutiques and fast-food outlets providing every tourist with a homefrom- home experience. But like all facelifts, the effect is only skin deep – the heart of Greek Nicosia has long since relocated from inside the walls to the new high-rise suburbs of the commercial city.